Last year, while writing a piece for an anthology, I had occasion to think about the part-time dogs in my life. “Part-time” defined as the four or five street dogs whom I feed, vaccinate and look out for in case there’s a medical emergency, but whom I can’t monitor around the clock – they are not house dogs, they treasure their independence, and have long been acclimatised to an outdoor life and routine. There are gradations here, of course: a few of these dogs have never come inside the house; one of them used to be mainly on the streets but now, in her old age, spends most of her time indoors. And then there’s Chameli, who spends a chunk of the day inside (and stays the whole night in winters) but has other friends to meet and peacocks to chase and obligations to keep; she might go missing for a full day or two at times, and when that happens I have to deal with the idea that something bad might happen to her – while crossing the main road, for instance – and that I might not be able to deal with it immediately. 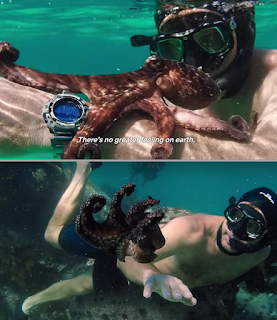 If you’re a responsibility-junkie and have a strong bond of this sort with a wild creature (or part-time-wild creature), it is a source of much worry. So I felt an immediate connect with a sequence of events midway through the Oscar-winning Netflix documentary My Octopus Teacher. Filmmaker Craig Foster, free-diving in an underwater forest off the South African coast, has developed an unexpected and mysterious bond with an octopus who has gradually come to trust him and accept his presence in her world. Enchanted, he goes to meet her every day. After witnessing an attack from a pajama shark that leaves one of her arms severed, and realizing how precarious her state is, he worries about being unable to meaningfully help. Back on land, in his house, a universe away from her sub-aquatic kingdom, he thinks constantly about her, wonders what she is up to, whether she is safe. “You just want to visit her every day and see what’s going on,” he tells us reticently. What that really means: he wishes he could keep an eye on her all the time, keep a protective cocoon around her.

I know what that feels like. But if I could be so worried about Chameli and other dogs – despite knowing that we occupy the same physical environment, and that they were unlikely to be any further than, say, a 100-metre radius or a five-minute walk from my building – how much more nerve-wracking it must have been for Foster to feel this concern for a creature that inhabits another world altogether: a world that he himself can visit for only short durations, and never quite grasp the full workings 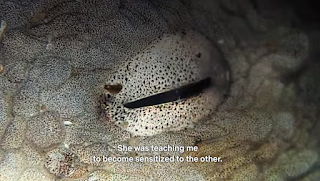 of. (There were times, he says in the film, when he thought about trying to chase the sharks away – but of course he knew he couldn’t really do that; even if there were a way of keeping all the octopus’s predators away, it would mean interfering with an ecosystem, interfering with the strange and savage ways of Nature. And who knows what consequences there might be? Including some that could in the long run be hazardous for his eight-limbed friend.)

Given its setting, it goes without saying that My Octopus Teacher is visually extraordinary. The multiple camera angles and high-resolution images of the submarine world in which Foster immerses himself (initially as a form of self-therapy) are reminders of how much more is technically possible today compared to when Jean Painleve made the first of his famous octopus films nearly a century ago. (Anyone interested in those wonderful short films, check Mubi India.) But My Octopus Teacher is also a reminder, as Foster says, that we humans know so little about the workings of underwater life – that incredible new discoveries are still being made every week, established wisdom overturned, and there is potential for so much more exploration. This really is an alien world, and connecting with it – and occasionally communicating with it – is one of the most moving and humbling things that our self-absorbed species can do. 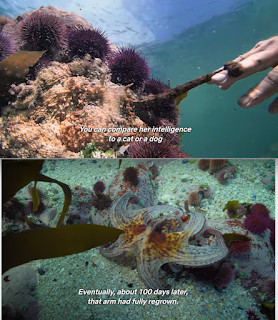 A couple of the film's most powerful scenes involve physical contact between Foster and the octopus: her reaching out for his fingers for the first time; then, more trustingly, “riding” his hand all the way to the water’s surface. These encounters, and his description of them, were a throwback for me to one of the most magical moments I have experienced, during a 20-minute sea-bed walk in the Andamans nearly a decade ago. There were many wonders: dazzling corals, bright orange clownfish flitting in and out of their sea anemones, a motionless but vicious-looking creature that seemed entirely made up of sharp teeth, an outtake from one of HP Lovecraft’s storyboards. But the transcendental moment came when the guides gave us mashed bread to feed a big school of black-and-yellow fish that had been swimming nearby. I must have been a little late in letting go of some of the food, because as the creatures swarmed around us I felt dozens of little mouths nibbling and sucking at my fingers. For just a second or two. But nothing prepares you for the frisson that comes with an experience like this.

Ultimately, though the octopus is the film’s main subject (and a fascinating one), she is also a window into a new world. The specific life lessons she “teaches” Foster can seem a little trite when looked at in isolation – I don’t think this film works best as a straight motivational treatise – but what’s important is that by the end she becomes a catalyst for his growing sense of the interconnectedness of all life.

I felt that sense during my Andamans sea-bed walk too – and I would feel it more deeply later. The trip – great fun though it was as it happened – acquired a cathartic dimension in hindsight, because just two months later I lost my Foxie. I had thought, hazily and sentimentally, about her during the walk when those fish nibbled at my fingers, and when tiny crabs shuttled past my feet into their burrows: I had thought about how, if the creatures of the deep were distant cousins to us, dogs were closer cousins still, and that my four-legged baby and I shared a common ancestor in the far reaches of time. Even now, that memory of a brief connection with a larger living world – and with an ancient biological past – brings some solace.

But back to My Octopus Teacher – it’s a stunning film, and chances are you’ll find your own epiphanies and “lessons” in it. If you watch it, try to watch it on a biggish screen.