How pop music delivers a gut-punch in Promising Young Woman 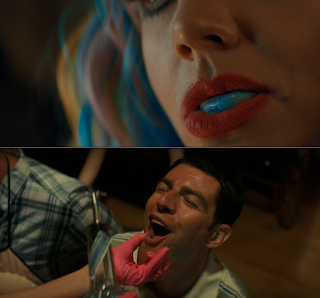 Emerald Fennell’s Promising Young Woman, one of this year’s best-picture Oscar nominees, has shiny happy music. A lot of shiny happy music. More than you’d expect in a story about an angry young woman, tormented by the rape of a friend in med-school a decade earlier, and out to get some form of revenge.

And yet, not only is the music fun and hummable, it also somehow manages to be central to the sinuous quality of this dark, hard-to-read film.

The very first scene sets the tone. The song is Charli XCX’s catchy “Boys”, with lyrics that go “I was busy dreaming 'bout boys / Head is spinning thinking 'bout boys” – an upbeat tune that you’d associate with a party where everyone is having (innocent?) fun. The opening visuals show us some of this playing out in a nightclub, and in the first 10 or 12 shots all we see are dancing men – or, rather, fragments of dancing men. They are mostly dressed in semi-formal clothes (an after-office get-together?), swaying, drinking beer, high-fiving, slapping their own butts.

With no woman in these initial frames, for a few seconds you might think it’s a stag party or a gay bar. Whatever the case, in Covid-19 lockdown time, a scene like this carries an extra wistful charge – and I say that as someone who isn’t into big noisy parties (and definitely not into dancing at parties).

But as the main narrative begins, danger signs appear. The first words of regular dialogue we hear are “F*** her. Yeah, f*** her.”

It’s from a conversation between three men, discussing a woman colleague who has presumably complained about unequal workplace treatment. One of the guys (he seems the decent, sensitive one of the three) points out that their colleague has missed out on some client meetings since women aren’t allowed to play at the golf club. But the other two shush him up.

Then their attention is drawn to a woman sprawled out on a couch, seemingly sloshed out of her mind. New jibes follow.

“Why don’t you get some dignity, sweetheart?”

As it happens, it is the “decent” guy – the one reluctant to badmouth his colleague, or to leer at this woman – who goes up to check on her. You might be lulled into thinking he is acting out of gallant concern and nothing else, but that illusion soon evaporates; this isn’t a film that trusts in the ability of men to be nice when they think no one’s keeping an eye on them.

It’s hard to properly discuss Promising Young Woman without providing spoilers, but I’ll keep it general. What it’s okay for you to know is that the woman in that opening scene is Cassie (Carey Mulligan) and that her mission is to seek out predators (including, or especially, men who don’t think of themselves as predatory) and give them a nasty shock.

If you return to the opening scene after having watched the whole film, you’ll find much prefiguring in it, even in the very sparse dialogue: in the “f*** her” and the bullying insistence on a woman being “dignified” (often coming from people who are far from dignified themselves). By the time the sequence plays out, the memory of that cheerful opening tune, “Boys”, will have faded – to be replaced by another happy song, “It’s Raining Men”, which provides the background score for the next scene where Cassie is again on the receiving end of unwelcome male attention.

Such motifs will run through the film: familiar old tunes, a few new ones. Most notably, perhaps, in the sweet scene where Cassie and a new boyfriend, unselfconsciously happy, goof around at a store where Paris Hilton’s “Stars are Blind” is playing in the background, and he starts mouthing the words to her amusement. It is the stuff of schmaltzy romantic comedy, complete with two likable people who are falling in love. But it is also preparation for a gut punch.

There are other superb musical choices, which manage to be plaintive and creepy at once – or change their effect depending on how you read or revisit a scene. One of my favourites involves the use of a lullaby sung by a little girl in Charles Laughton’s magnificent 1955 gothic thriller The Night of the Hunter (a film about two innocents up against a big bad wolf – much like Cassie feels like she has her friend Nina’s spirit accompanying her in her wanderings through the dark woods of male entitlement). But there is also another song from the 1950s, “Something Wonderful” from the musical The King and I, with lyrics that are meant to be stirring but become scary when one places them in the context of sexual assault by guys who are allowed to get away with it (because they are “achievers” in other fields, or because “we were all so young and drunk”, or “these things happen”).

Promising Young Woman is among my favourites of the Oscar-nominated films (I wish it had won best actress for Mulligan, who is fabulous in a very tricky role), and that’s partly because of how it mashes tones and sub-genres, keeping a viewer thoroughly off-balance. Our experience of the film is comparable in some ways to that of the “good guy” who tries to force himself on Cassie in the opening sequence. He thinks she is barely conscious (and will presumably be unable later to remember exactly what happened) – but then she turns out to be not just sober and alert but razor-sharp, sitting up and looking him in the eye with a “What are you DOING?” In the same way that this moment represents a complete shift in gear for the man – from feeling hornily, confidently in control to stunned and scared (and perhaps even a teeny bit ashamed?) – Promising Young Woman puts its viewers through a roller-coaster of emotions. One minute you’re chuckling at what seems to be jokey banter, then a few seconds later you have been implicated in something much darker; one minute (I’m trying not to give away anything specific) you’re enjoying Cassie’s vengeance on a guy who deserves it, the next you’re afraid for her and thinking “Hey, this wasn’t supposed to play out this way.”

The irreverent or flippant tone of parts of the film, its evoking of the slasher aesthetic in places, the bright bubble-gum set design… these are things that might seem off-putting or inappropriate to a swathe of viewers: ranging from defensive men (the sort who promptly yank out #notallmen# during conversations about sexual harassment) to feminists who might wonder if the film is having a little too much fun (and encouraging viewers to have too much fun) in its telling of a very sad story. If a male writer-director had made exactly the same film – with the lilting soundtrack and the echoes of B-movies about vigilante justice – there would have been more indignant allegations about the use of a seemingly woman-sympathetic narrative as a mask to cater to the male gaze, and to construct an “entertaining” film that doesn’t even end on a properly affirmative note.

I loved it. For one, I had no trouble with the premise that anyone can, at some point or the other, have participated – even if only on the fringes, and perhaps under peer pressure – in an act that can have devastating lifelong consequences for another person. We have a few too many virtuous and self-consciously optimistic narratives emerging from “liberal” filmmakers and writers these days (especially in India), and it’s a relief to see something that doesn’t give people the benefit of doubt at all – and uses jet-black humour to emphasise this. It warmed the cockles of my misanthropic soul.

I also think this is a film you should watch a couple of times, for two very different experiences. The first time, you might feel that Cassie, in some of her interactions with various people (a former classmate, the school dean, Nina’s mother), is being used as a loudspeaker to feed viewers with the right perspectives on sexual assault and victim-blaming. (In response to the old whine ”It’s a guy’s worst nightmare being accused”, she pleasantly says “What do you think a woman’s worst nightmare is?”) But a second viewing – with full knowledge of the back-story and the degree to which her life was torpedoed by what was done to her friend – makes it possible to fully appreciate her need to confront and stare down people who never admitted the enormity of what happened. “Do you ever think about that night?” she asks a former (female) classmate in one scene, the woman replies, “No. Why would I?” and Cassie echoes the words “Right. Why would you?” with a pseudo-casual grin, a strained expression that carries a decade of pain behind it. There is an immediate sense here of how easily people can look the other way, or simply “get on with it”, while one person who cares enough has her life petrified for years because of what someone else did.

In moments like this, Mulligan’s performance and Fennell’s writing make the film incredibly powerful at a visceral level, even as its narrative arc continues to resemble that of a genre-bending action-comedy. As it turns out, you can engage with all these things at the same time: the pain that Cassie (and Nina) have gone through, the importance of retribution and accountability; but also how the fast pace and pulp thrills are used as vehicles to deliver that emotional punch. And, of course, that bouncy soundtrack doesn’t hurt at all.

Posted by Jabberwock at 8:11 PM