Home and the world: a short review of Nomadland

(Have been doing some very short, snippet-ish reviews lately for India Today, Reader’s Digest and a couple of other publications. Don’t usually feel motivated enough to share those, but here is a little piece about Nomadland, which won a few top Oscars last month – and which, as it happens, was the first film I watched in a hall after more than a year of abstinence. Now, of course, it looks like it will be the last such experience for several months.
Also: with all the Satyajit Ray talk of the past week, I couldn't resist a "Ghare Baire" reference in the title of this post)
---------------

Some of the most stimulating moments in film history have occurred at points where documentary and constructed narrative intersect, or even blur into each other. Nearly a hundred years ago, Robert Flaherty’s Nanook of the North – about the Inuit people of the Canadian Arctic – introduced movie viewers to the daily rigours of a world they knew little about; but doing this entailed a certain degree of artifice and the use of scripted scenes, such as the one where a hunter is made to use a harpoon rather than a gun. A century on, Chloé Zhao’s Nomadland, which won the best picture and director Oscars this year, also melds unflinching reality with a fictional narrative, and similarly does this while chronicling lives outside the mainstream: in this case, the van-dwelling “nomads” of modern-day America, who live on the road and form communities and camps to help each other.

There are scenes in this film that could easily have come out of a straight documentary, including the appearances by real people – such as Bob Wells, president of the Homes on Wheels Alliance – speaking as if being interviewed for the camera. Yet, in adapting its script from a non-fiction book by Jessica Bruder, Nomadland organises itself around an invented character. After losing her job during the Great Recession, the recently widowed Fern (played by Frances McDormand, her face a study in both desolation and hope, much like the landscape she moves through) hits the outdoors with her van and gradually finds a support system, or a series of support systems. In the process, through her eyes, we learn about this vital culture and way of life.

So here is a professional actress playing a scripted character and interacting with real-life nomads who are playing themselves – or rather, versions of themselves. (One person, Swankie, is shown as dying of cancer in the film though she is still alive in reality.) Nomadland has verisimilitude but also a cinematic sweep and a sense of the innately dramatic moment. On the whole I admired it – from a distance – more than I felt emotionally touched by it, but in a few scenes, when an immediate connect took place, the effect was devastating: take the moment when a friend of Fern, trying too hard to be helpful, accidentally breaks her plates, and we see how shattered she is – with nothing underlined, one senses how much these physical belongings (which probably carry memories of her time with her husband) meant to her, even though she is now leading a life that involves letting go of possessions. 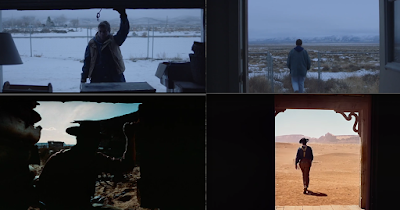 It feels strange, at a time when we are all being asked to stay indoors, to watch the unsheltered Outside being presented as a character in itself – and as a way of life that is nourishing even as it is risky. But this is a story about being adrift and tethered at once. For some, its opening and closing scenes may evoke John Ford’s classic The Searchers (which is also about new and fluid definitions of “home”), but Nomadland, even as it continues the legacy of the revisionist Western, is essentially a one-of-its-kind film about a new time and place, heartfelt in its contrasting of Fern’s chosen life with the more structured possibilities that might be available to her.

Posted by Jabberwock at 3:42 PM