The actor Lalit Behl died of Covid-related complications on the 23rd. I wrote this short piece for First Post about his wonderful performances in Mukti Bhawan and Titli (the first of which -- centred on the idea that dying can be a leisurely, contemplative affair -- makes for surreal viewing in the current situation).
------------------

In one of many hard-hitting scenes in the 2014 film Titli – about a law-breaking, lower-middle-class Delhi family and a young man who wants to escape it like a butterfly fleeing a chrysalis – there is an explosion of violence from the eldest son Vikram. It is unsettling, claustrophobic, rage-filled, and much of the viewer’s attention will understandably focus on Ranvir Shorey’s visceral performance as Vikram – yet one’s eyes are drawn also to the family patriarch, in white kurta-pyjama, shuffling in and out of the cluttered frame, watching this ferocious battle between his sons. He mutters under his breath, nonchalantly dips biscuits in his cup of tea even as people scream around him; his eyes manage somehow to be droopy and shifty at the same time. 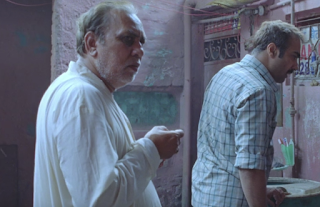 Lalit Behl plays this small but indelible role (in a film directed by his son Kanu) and he is pitch perfect. For much of the narrative, the father is in the background – but in his unobtrusive way he is keeping an eye on the power equations within the dysfunctional family, and moments like this suggest there’s more to him than meets the eye. Later, in a telling little exchange with his daughter-in-law, he proposes that the family go together to Vaishno Devi, where he had gone years ago with his wife: “Usske baad maine haath nahin uthaaya kisi pe.” (“After that I never raised my hand on anyone.”)

Without clearly spelling anything out, that line – and the insouciant way in which it is delivered – hints at a history of violence in a family ridden with masculine energies: the effect that his upbringing probably had on his sons, the fount of the anger and despair that runs through the narrative. It gives heft to the film, and helps us understand the protagonist and his rebellion.

Behl, who died on April 23 aged 71, had a long career in theatre and television as actor, director and producer, but his most notable film performances over the past decade were as two different sorts of fathers in two fine, low-key productions. Titli was the first of these, but the longer role was in Shubhashish Bhutiani’s Mukti Bhawan (English title Salvation Hotel) where Behl plays Daya, a man who believes his time has come and decides to go to Benares to await death. In the process he greatly inconveniences his busy son Rajiv, who feels obliged to go along for what could be an interminable stay. “Tez chalao,” Rajiv tells the cab-driver when they are on their way to Benaras; “Dheere chalo,” the father says – I don’t want to die before we get there. The two men, with their contrasting attitudes and priorities, will soon find themselves together in a place where time stands still. 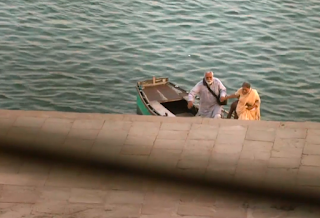 Mukti Bhawan is a comedy-drama that effortlessly weaves droll little moments into the fabric of a bleak larger picture – the essential sadness imbuing the story is only felt with hindsight. And in the same way that Behl’s performance in Titli manages to be both placid and faintly menacing, his performance here seamlessly covers two modes. On the one hand, there is the poignant seriousness of Daya’s desire to prepare for his end; on the other hand, there is the surreal effect this proclamation has on his family, especially his son. In a scene midway through the film where Daya thinks he is dying at last, he expresses remorse to Rajiv for having poured cold water on his childhood dreams: “You used to write such innocent poetry, but I never let you bloom. I have been such a bad father.” Behl’s work here accommodates both the tenderness of this “deathbed” moment as well as the sheepishness of the morning after when Daya – still very much alive and feeling better – replies with a nod of his head and a “Fit” when his son asks how he is. 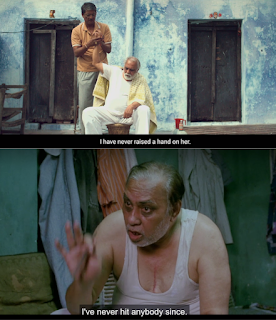 The heavy-lidded eyes with just the hint of a twinkle in them, the shuffling walk, the quiet gesture, the knowing humour, the gaze that manages to be piercing and laidback at once. These are essential facets of this performance as a man who is supposedly freeing himself of worldly matters but still complains about the tastelessness of the food given to him – a man who finds companionship and banter, things to live for in the city of salvation. As a parent, Daya is a pest but also a teacher and a spiritual guide, showing his son the slower, more contemplative side of life – and eventually encouraging Rajiv to be a better parent to his own young daughter. In this sense, Behl’s performance feels like a complement to his Titli role where the father’s lack of empathy or sensitivity seems to have permanently infected his family.

“Mrityu ek prakriya hai,” Daya is told at one point. “Death is a process – are you ready to begin that process?” It feels painful to re-watch Mukti Bhawan just now, when the gruesome second wave of Covid-19 has – temporarily, one hopes – made nonsense of the idea that dying can be a leisurely, carefully planned-out endeavour. There is such a stark difference between a story about waiting for weeks in a Benares “salvation hotel” and a real-world situation where death comes swiftly and Covid protocols must be coldly followed with no elaborate or personal farewells – the world that Lalit Behl himself departed from. Looked at in this new context, both the plaintiveness and the dark comedy of Mukti Bhawan become sharper, more pronounced and immediate. And Behl’s performance – as a man who is wise and stubborn, parental and childlike, composed and annoying, all at the same time – anchors the film, giving it humanity and allowing us to buy into its biggest conceit: that death can be dignified even when the road leading to it is full of missteps and potholes. It is a useful thought in the current time.

Posted by Jabberwock at 2:45 PM