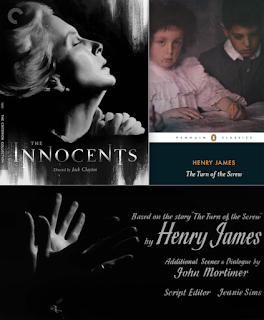 Some of you would know about the new Netflix series The Haunting of Bly Manor, loosely adapted from Henry James’s novella The Turn of the Screw, about a governess employed to look after two young children. My next film-club discussion will be about the 1961 film The Innocents, which was based on the same story (with a screenplay that both Truman Capote and John Mortimer contributed to!). Deborah Kerr plays Miss Giddens here, and the film has a reputation as one of the milestones in psychological (or “suggested”) horror, finding many visual equivalents for the narrative ambiguity of the James story. (It is superbly shot by Freddie Francis.)


We’ll have the online discussion sometime on the weekend of Nov 21-22 (if I survive the Delhi air of the next few days), and I’ll be sharing the film with my email group soon. Anyone else who is interested, please mail me (jaiarjun@gmail.com) and I’ll send across the link.

By the way, the full text of The Turn of the Screw is available online, for anyone who cares to make a book-to-film comparison.

P.S. we might also discuss the 1963 film The Haunting, based on Shirley Jackson’s The Haunting of Hill House (which was also adapted for the earlier season of the Netflix Haunting anthology).