Have been too fatigued and out of things generally to write these little animal updates, but when something nice happens on the street-dog front it’s always a temporary boost. Earlier today I was wrapping up an essay about “part-time dogs”, and was struggling with the bit where I had to explain how complicated it can be to get street dogs — even the ones who know you well and trust you — vaccinated or sterilised. The amount of careful pre-planning that goes into luring or cornering animals who are innately wary, after their many bad experiences with humans. How even a couple of hours of running around with paravets or accomplished dog-catchers might end in frustration and a waste of everyone’s time. And the other sorts of frustrations and heartaches. (Two of the PVR parking-lot pups I got vaccinated last month were run over just a few days later; another can’t walk after being hit by someone or by a vehicle.) 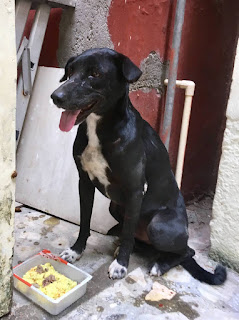 Today, just a short while after banging that piece into its more-or-less final form, I managed — with the help of an aunt, who offered her fenced garden and a bowl of chicken liver for the purpose — to get this fellow’s long-overdue vaccinations done. He hangs around in the park beneath my mother’s flat and is known by the generic name Kaalu. He is skinny and weak-looking (this photo is flattering) but is also aggressive at times, and our colony guards had been asking me, with increasing urgency, to get his anti-rabies shots done because he sometimes runs after visitors and snarls at them.

After my aunt got him into her garden today, I got my animal-helper friends Ravi and Manoj to do the vaccinating, but even in this enclosed space it wasn’t easy. Though Kaalu is fairly comfortable with me and I was the one who threw the leash around his neck and tightened it, he bolted and struggled so hard I was afraid he would dislocate something. Thankfully Ravi managed to give the shots with maximum efficiency and then Kaalu, after he had regained some of his composure, had himself a nice meal and was last seen sleeping under his favourite car in the evening.

The guards were happy when I told them. “Logon ko bahut darr lagta hai iss se,” they have been saying for the past few weeks. I didn’t tell them that a couple of months ago I had witnessed what must be just one instance among many of this dog being on the receiving end of *human* aggression. Kaalu was following me around during my evening walk when I saw a vegetable vendor hit him hard, with a stick, on his bony and delicate back — for no better reason than that he had been sniffing around outside his shop. I lost it, of course — shouted at the guy for five minutes, pointed out that sticks could effectively be used on human skulls too, and was briefly tempted to channel my father’s spirit and knock a few things in the shop around. Avoided that in the end. But I’m not surprised at all when our colony guards tell me that Kaalu sometimes runs at them barking when they are on their rounds, waving or thumping their sticks.

Anyway. Just one vaccination for one among many neighbourhood dogs. Still feels like an achievement, because of how complicated these things can get…