The magical world of Powell-Pressburger: an online course 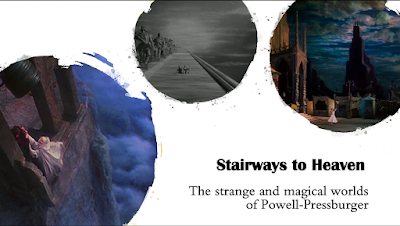 [Here are the details of a two-session course I will be teaching about the brilliant films of Michael Powell and Emeric Pressburger. Anyone interested, please mail me at jaiarjun@gmail.com]

In the 1940s, the writing-and-directing team of Michael Powell and Emeric Pressburger made a number of films that still stand among British cinema’s most striking achievements. Four of these films (A Matter of Life and Death, The Red Shoes, Black Narcissus, The Life and Death of Colonel Blimp) made it to the BFI’s list of the top 50 British films of the 20th century, while at least two of their other works made during this period (A Canterbury Tale, I Know Where I’m Going!) have a strong cult following, for excellent reason.

Early in their collaboration, Powell-Pressburger (known as “the Archers”) made propaganda films to boost wartime morale – e.g. 49th Parallel, about Nazis coming ashore in Canada and facing more resistance than they’d expected. Inevitably, these had pedantic moments that directly addressed the major themes of the time, such as the need for Britain and America to set aside their cultural differences and historical baggage and jointly fight a dangerous enemy. But as the decade wore on, other aspects of this powerful artistic partnership came to the fore: even when the stories were outwardly prim and stiff-upper-lip, about English stoicism amidst war and other crises, there was always something playful, sinister or fairytale-like underneath. The tearing of the fabric that separates reality from fantasy, or an idealized past from a pragmatic present, became recurring themes; the colour films in particular, beautifully shot by Jack Cardiff, were lush, dramatic, and visually unlike anything else in the British cinema of the time (which tended to be starker and more restrained). There are strange and haunting moments in all of these films, which resist explanation and linger in the mind long after an initial viewing.

This short course – two sessions, each two hours in duration – will be an introduction to the major Powell-Pressburger films. I will make around 6-7 of the films available to the participants; this will be followed by a discussion about specific films as well as the broader themes and stylistic motifs in the work of the Archers. There will also be a side-discussion on the 1960 Peeping Tom, the Michael Powell-only film that almost ended his career but is today considered one of the iconic works of the thriller-horror genre.

(Since it may be unreasonable to expect the participants to watch several of these films in a short time-span just for the course, the detailed conversations will be reserved for three or four films – but I will also make spoiler-free allusions to the other works, which the participants can watch later on their own time.)

Recordings of the sessions will also be sent to all the participants.

Posted by Jabberwock at 9:39 AM