Real cops and real cases in Bengaluru: a short review of Crime Stories

The new docu-series Crime Stories: India Detectives (on Netflix) is a ground-level view of policework in one of India’s largest, most dynamic cities. I did this short review for India Today.
---------------------

“I wanted the power and courage of male officers,” a lady cop tells the camera, “I didn’t even know women could be policemen.” Another inspector describes the helplessness he feels when he sees his autistic child: the contrast between being in control at work, with people saluting him, and being vulnerable at home. Wearing the police uniform is like wearing steel, yet another cop says – you feel excited when you put it on in the morning. 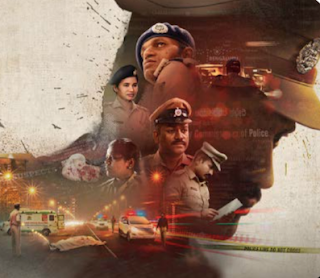 These are vignettes from the new docu-series Crime Stories: India Detectives, made in cooperation with the Bangalore police as they investigate four unrelated cases: three murders, and the kidnapping of an infant (possibly for an occult sacrifice). This might sound like material for juicy stories with twists and expositions, but Crime Stories isn’t that kind of show. It emphasises the mundaneness of policework, and the importance of perseverance – as well as luck – during periods of stasis. The camera follows the cops as they visit crime scenes, work out the sequence of events, bring in suspects. There is much speculating, some moralising (“If he was a good person, this might not have happened to him”). CCTVs often prove invaluable, though getting the right footage and piecing it together can be laborious.

In recent times we have seen cop shows and films – Delhi Crime, a dramatization of the 2012 Nirbhaya rape-murder, as well as Soni and Paatal Lok, come to mind – that have tried to capture what everyday policework is like, minus the flourishes of mainstream super-cop movies. An out-and-out documentary like Crime Stories is a reminder that even those (relatively) restrained fictional works have clear-cut narrative arcs. Of course, documentary filmmakers do make creative choices too: deciding what to show, when to show it, how to use a brief reaction shot or a cutaway to heighten a tense moment, or an aerial shot to convey the busyness of a city. All these techniques are used here, with varying degrees of effectiveness.

An engaged viewer will have some questions: how much access did the filmmakers have to the police while these investigations were on? Was there a certain amount of staging for some scenes, such as the ones where cops apprise their senior officers about a case’s progress? What are the ethics of having a film crew present when a suspect is being interrogated, and do real-life cops occasionally "perform" when a camera is pointed at them? (Give us 10 minutes alone with this suspect, a cop tells the filmmakers half-jokingly – “We’ll call you back after we have put the final touches on him.”) 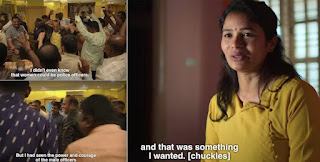 While this isn’t a denouement-filled show, what makes it compelling is its depiction of regular people in everyday situations  – including officers who came from small towns or villages, still overwhelmed by the scale of life in Bangalore – and of personal growth, such as that of sub-inspector Latha, who was judgemental of sex workers until a case sensitised her. It is a fascinating view of the nature of crime, and of the class divide, in a large IT city where progress, aspiration and discontent are closely twined.

Posted by Jabberwock at 4:38 PM