One of the more surreal things to have happened recently is that I got a byline in the latest issue of Cahiers du Cinema. More importantly, alongside an image of the famous “video call” scene from the classic Maya Bazaar. The early-90s version of me, learning about this legendary journal, wouldn’t have seen this coming.
This isn’t a long or in-depth article, obviously — it is a one-page “Perspective from India” about my recent discoveries as a movie-watcher — and the writing is basic since it is directed at a non-Indian readership. But it was still cool to be able to fit names like NT Rama Rao and Sridevi and Rajinikanth and Kummatty into a piece that was translated and published in French.

(The original English version of the piece is below.) 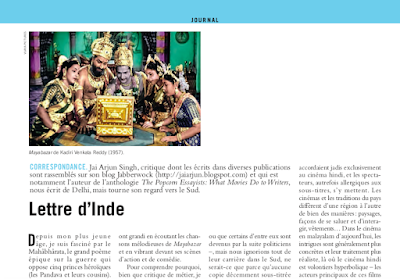 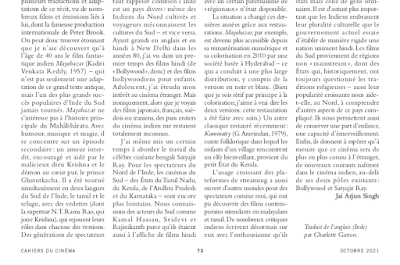 From a very young age, I have been fascinated by the ancient Indian epic Mahabharata, about the great war between five heroic princes, the Pandavas, and their cousins. By my teens, I had read many translations and retellings of this story, and watched many films and TV shows based on it – including non-Indian ones such as Peter Brook’s famous international production. It is perhaps surprising, then, that I was almost forty when I first watched the 1957 fantasy film Maya Bazaar – which is not only based on the Mahabharata but is also one of the most popular South Indian films ever made.

Maya Bazaar isn’t concerned with the main body of the epic, but uses humour, music and magic to focus on a side-story: a forbidden romance that is encouraged and aided by the mischievous god Krishna and the good-hearted demon prince Ghatotkacha. The film was shot simultaneously in two south Indian languages, Tamil and Telugu, with some major actors (including superstar NT Rama Rao, who plays Krishna) repeating their roles across the two versions.

Generations of viewers grew up listening to Maya Bazaar’s melodious songs and thrilled by the action and comedy. And yet, despite being a professional film critic, I hadn’t even heard of the film until I was an adult. To make sense of this, one must remember that India is an incredibly diverse country, which means that even well-educated and well-travelled North Indians might have very little knowledge of the cultures of South India – and vice versa. Growing up in New Delhi in the 1980s – with English and Hindi as my main languages – my earliest experiences of film-watching centred on Hindi cinema (sometimes called “Bollywood”) and children’s movies from Hollywood. As an adolescent I expanded my boundaries and discovered international cinema. But ironically, even as I got to know the films of other countries – Japan, France, Sweden, Iran – there were entire landscapes of Indian cinema that I knew nothing about.

Even discovering the work of the internationally famous Bengali director Satyajit Ray was a slow process for me. But for North Indian viewers, the southern cinemas – from the states of Tamil Nadu, Kerala, Andhra Pradesh and Karnataka – are even further away. We knew some South Indian actors such as Kamal Haasan, Sridevi and Rajinikanth because they starred in Hindi films too, or because some of them later became politicians – but we knew almost nothing of their movie careers in the south. One reason for this was the unavailability of good subtitled prints of what we North Indians patronisingly called “regional” cinema. (This term included anything outside the Hindi movie world.)

This has changed in recent years, through restorations. For example, Maya Bazaar became more accessible after it was digitally remastered and colourised in 2010 by a Hyderabad-based company – this led to wider distribution for even the original black-and-white version of the film. (I have watched both versions and loved them both. Though I am not a fan of computer-colorisation in principle, this restoration has been done with care and attention to detail.) Another recently restored classic is the 1979 film Kummatty – a folk-tale about village children and a friendly wandering spirit, from the small southern state of Kerala.

There is also the online streaming culture, which has opened new worlds for viewers like me. Thanks to the streaming platforms, it has become easy to discover the exciting contemporary works of Malayalam and Tamil cinema (from Kerala and Tamil Nadu respectively). Many Indian critics are now reviewing these films with the enthusiasm that they earlier reserved for Hindi cinema, and many viewers who used to stay away from subtitled films are watching them.

Indian cinemas and traditions differ from each other in many ways: in the changing landscapes, the way people greet and interact with each other, the clothes they wear. In the case of the current Malayalam cinema, the stories are usually more grounded and their treatment more realistic, compared to the larger-than-life Hindi cinema – the major actors don't look like glamorous movie stars but everyday people.

There is a theory that the films one discovers around the age of 14 or 15 have a lasting impression on your life. When I finally got around to watching films like Maya Bazaar and Kummatty, I wished I could have experienced the wonder of watching them in my childhood (like many of my South Indian friends did). But the compensation is that I got the opportunity to feel like an excited child again in my middle age – a time when most viewers have settled tastes and clear ideas about what they want to watch. What once used to be an alien culture has become more familiar, and I feel younger and rejuvenated as a result.

It is all the more important for Indians to embrace our cultural plurality because our current government is trying to establish the whole country as a Hindu nation. The South Indian cinemas are from regions outside the "mainstream", including states that have a history of questioning religious traditions – so their increased popularity helps the rest of us discover other aspects of this complicated country. It also helps us nourish a sense of wonder and discovery. And ultimately, the hope is that as these films become wider known internationally, they will introduce more viewers to new currents of Indian cinema – not just the two poles of Bollywood and Satyajit Ray.
Posted by Jabberwock at 9:01 AM