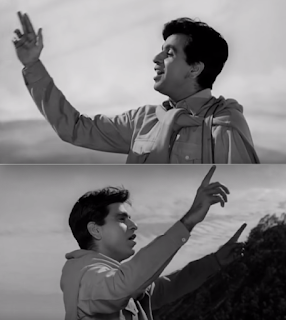 (Wrote this piece about Dilip Kumar for Mint. The coming Saturday’s issue of Mint Lounge will carry a slightly extended version)

One of my memories of reading Hindi-film magazines in the 1980s was that when young actors were asked about their idols or inspirations, the answers seemed to follow a template. Among American favourites, the names “Brando” and “De Niro” were reverentially intoned. Among Indian legends, it was almost always “Dilip Kumar” or “Yusuf saab”.

At the time, I had seen and loved films like Karma and Shakti – and yes, even Kranti, with that “Chana Jor Garam” song where Dilip Kumar and Manoj Kumar were strung up by the comically evil Brits – but I had no firsthand experience of the much-idolized Yusuf saab of yore. This is what one gathered from those magazine pages and from parents’ conversations: he was so understated. The opposite of what Hindi cinema usually stood for. Gravitas, soulfulness, thehraav were his stock in trade. His performances were “realistic”.

This eulogizing of subtlety – and the blanket equating of quietness with realism – was a little puzzling to someone who was from a Punjabi clan and knew many boisterous or demonstrative people in real life. An obvious question was: what if Dilip Kumar were required to play a flamboyant character?

The answer would come over the years, as I discovered older cinema, and accordingly I’d like to emphasize an aspect of Kumar’s screen persona that sometimes gets overlooked: apart from anything else, he was a great matinee idol who knew how to work the camera to his advantage.

This is not to undermine his emblematic roles, or to deny that he was marvelous at what one might call studied understatement. Clichéd though it sounds, he is excellent as the sulky, limp-wristed non-lover in Bimal Roy’s Devdas (though for my money, he was out-understated, so to speak, by Suchitra Sen’s Paro in their scenes together). The quiet intensity is there in so many seminal films, from the 1949 Andaz to the 1951 Deedar to the 1957 Musafir, in which he sang in his own voice for the first time onscreen – in a beautiful, plaintive scene where the characters played by him and Usha Kiran, former lovers, recall their young and carefree days together.

But beneath the hurt lover withdrawing into himself, there was also one of the most dazzling smiles in our cinema. (After a Mumbai Film Festival screening of the Partition-Era film Qissa, Tillotama Shome – who played a girl raised as a boy – mentioned that the director had asked her to watch early Dilip Kumar performances in films like Tarana, because he wanted her to look at the way he smiled, even in tense situations.) And there was a showman too, a man with style, panache, star quality.

Some Dilip Kumar fans – those who prefer to restrict him – would treat those descriptors as slurs. But I mean them as a tribute to a star-actor’s ability to shift registers. 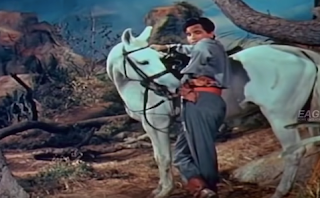 Consider Kumar in Mehboob Khan’s 1952 epic Aan, a film that can be somewhat hard on the eyes today because of the overdone Technicolor (it was India’s first such production, meant to impress international viewers, and it may have blinded some of them instead). He is required to swagger and preen and swashbuckle and get the better of a spoilt princess, and he does all this with conviction – but without relinquishing any of the softer qualities that most people associate with him. Watch the handsome young poseur bandaging his horse’s wounded foot while singing “Maan Mera Ehsaan” to a sullen Nadira, balancing genuine concern for the animal with the demands of being a dashing romantic lead – and treating the scene not just as a stand-alone musical interlude but as an important part of the film’s universe. It’s as if – to evoke the qualities of the Hollywood actors Kumar would have watched as a young man – the brash cockiness of Errol Flynn had somehow been mixed with the bashfulness, the poetic realism of Henry Fonda. If you can imagine such a thing.

Many years later, here is Dilip Kumar bounding about at a podium in that bloated but often very intriguing satire Leader, showing a fine sense of the absurd and even a knack for slapstick. Or watch him throw himself into the part of the gregarious, emotional Gungaram in Gunga Jumna, even performing “Nain Lad Jaiyen” – one of his first full-throated musical sequences – as if he had been singing and dancing throughout his childhood. Among the Hindi-film actors who were celebrated for their naturalism, only a select few could bring conviction to song performances (which involve a very different set of performative skills). Nutan was one, Kumar was another (and how good they were together in the first rendering of “Dil Diya Hai, Jaan bhi Denge” in Karma).

Like almost every male star in Hindi cinema, Kumar could – when allowed to get out of control or over-indulged by a script – seem like a self-congratulatory ham at times. But more than most other star-actors, he managed to strike a balance between internalizing a character while also being a popular star, aware of his following and reputation and how a specific gesture – even a “subtle” one – would make him look on screen. There are many instances across his body of work where you see both facets in the space of a few minutes of film. In the opening scene of Madhumati, the car moving through the stormy night, he tosses off his lines with Brando-like carelessness: chatting with his friend, peremptorily telling the driver to go faster. But then, just a short while later, in the “Suhana Safar” song, he stands on a rock and waves his arms like an orchestra conductor, as if he were really hearing the tune in his head – and as if he knew that the attention of every last member of the audience should be on him.

In the best work of this actor, the two poles of Realism and Stylization blended into one, and you could see how they might work together. It’s a lesson that most major performers working in mainstream Hindi cinema have had to learn, but one that very few could master.

(Related posts: Dilip Kumar and Vyjayanthimala in Paigham; in praise of Gunga Jumna)

Posted by Jabberwock at 5:38 PM