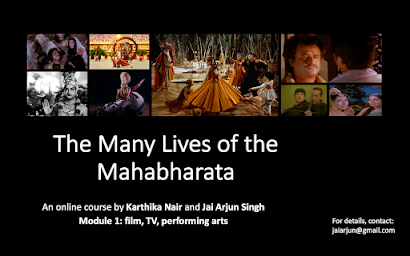 This is for everyone who has expressed interest in the Mahabharata course being taught by Karthika Nair and me. Given below is information about the structure, dates and fees.

The Many Lives of the Mahabharata: an online course by Karthika Nair and Jai Arjun Singh

Introduction: Like all foundational epics across cultures, the Mahabharata has undergone many changes over the centuries, depending on place, time, context, and teller – a process that is still very much on today. The countless retellings are important reminders of how malleable old stories are, especially in a country as culturally and socially diverse as India: as we travel from one region to another, as the lenses shift, we find variations in each incident and in our perceptions of different characters.

The epic can be read as a work almost shorn of supernatural elements (it’s highly probable that that’s how the story WAS first told, in the form of the much shorter critical text called the Jaya, which revolved primarily around the Kurukshetra War itself) or as a divinity-imbued saga where a Vishnu avatar is the puppet-master, sometimes centre-stage and sometimes behind the scenes, showing the way to confused mortals. As a fluid work of literature, its many interpretations range from Kamala Subramaniam’s deeply inclusive, sentimental view of the characters to Irawati Karve’s coolly anthropological take which analyses ulterior motives, sparing no one.

We will cover many of these Mahabharatas, mainly through representations of the epic in popular culture. This course is meant for those who have a basic familiarity with the Mahabharata (it is enough to know the essential storyline) and would like new ways of engaging with and thinking about it. Our primary focus is on works that have, in sometimes surprising ways, affected our own perception of the epic, and percolated into our writing. In other words, what you get is two writers whose lenses have been informed and expanded by many choices made by the makers of these adaptations, by the moral and social questions they – sometimes unintentionally – threw up.

Structure: a number of modules that deal with the Mahabharata across multiple media, including literature and cinema: from straight retellings to imaginative ones, from perspective versions (a particular character’s restricted viewpoint) to the omniscient-narrator view as well as literary criticism and commentary. Each module will have four classes of 90 minutes each, spread over four weeks. Each class will have a particular theme, character or relationship as its fulcrum.

The first module will cover Mahabharata representations in film, TV and performing arts. The range of tones, styles and approaches in these works is enormous: it encompasses films such as the fantasy-classic Maya Bazar, Mani Ratnam’s Thalapathi, Shyam Benegal’s Kalyug, as well as countless non-Mahabharata films that contain characters and situations influenced by the epic’s basic templates (such as Trishul) or provide current commentary on its themes (Jaane bhi do Yaaron); the hugely popular TV serials by BR Chopra and others; Peter Brook’s famous staging of the epic and its subsequent film version; the many performances of Dharamveer Bharti’s play Andha Yug; Akram Khan’s Until the Lions (based on Karthika Nair’s book of poems about marginalised voices in the Mahabharata), and several other notable – though often disregarded – works that yield surprising moments of interest.

NB1 While we will show relevant clips from the works that we reference, time constraints will not allow full screenings. We will not make the entire works available, out of respect for IPR — but links to the said works will be given, and also to the platforms where they can be viewed or obtained.

NB2 Since only very limited interaction may be possible during the main body of the sessions, we will allow for an extra 15-20 minutes at the end of each session, where specific questions may be asked and addressed.

The following topics will be discussed in Module 1:

A relationship of convenience, or a friendship forged in empathy? A road to mutual destruction or redemption?
On the many ways of looking at the Karna-Duryodhana relationship

A woman scorned and an obstinate patriarch: the Amba-Shikhandi story
And, by extension, the story of Bheeshma’s unwavering devotion to his vow

Marginalised wives and sons: Hidimbi and Ghatotkacha, Iravan and Ulupi

Demons of the night, to be tucked out of sight, or expedient and expendable instruments for the greater cause?

Smugly omniscient God, shrewd mortal chieftain, or something in between?

The sessions will be on the following four Sundays:

(Recordings of the sessions will be made available to participants)

Fees for the four-week course

For participants in India and Asia: Rs 5,000

For participants outside Asia: $150

If you wish to confirm your attendance, please let us know at jaiarjun@gmail.com