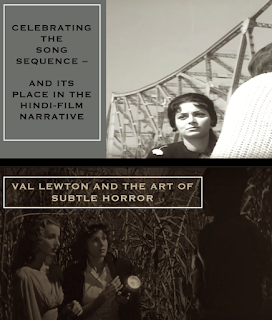 As promised, here are the details for the two film-appreciation modules: one on Hindi-film song sequences, the other on Val Lewton's 1940s films. Each of these is the starting point for a series of discussions I will be conducting around Indian and non-Indian cinema. I am doing this alone to begin with, but in the next 2-3 months I will also be working occasionally with the Film and Television Institute of India (FTII) as well as with a cinema website. I will provide information as and when that happens.


MODULE 1: Celebrating the song sequence and its place in the Hindi-film narrative


A four-week module (one 2-hour class per week) that will examine the many functions, moods and aesthetics of the song sequence – this will also be a prelude to a course about significant (non-musical) sequences and vignettes from Hindi films.

For participants in India and Asia


Alternately: Rs 1000 per week for those who are not sure about committing to the full course, or prefer to test the waters first. (This is not an option I plan to offer for subsequent courses, though.)

For participants outside Asia

A few of those who have mailed me expressing interest are in time zones that make the above hours impractical. Accordingly, for only this module, I am offering another option for each of the four classes, on the same dates:

If you mail me confirming your interest in this module, please also mention your preferred time. (This applies to anyone, since some participants based in India might prefer the morning slot too.) If a reasonable number of participants apply for the morning slot, I will conduct each of these sessions across both timings.

MODULE 2: Val Lewton and the art of subtle horror


A two-week module (one two-hour class per week) that will follow the broad format of the film-noir sessions I have recently hosted: that is, I will provide a number of Lewton films to the participants beforehand (most of these films are not available for free online) and I will then lead a discussion around specific works and the horror genre as it was then.

For participants in India and Asia


Rs 2000 for the 2-week course (a 2-hour class per week, plus all the Lewton films being made available for downloading and viewing).

For participants outside Asia

A candid note: knowing that many of us are struggling financially during these tough and unpredictable times, I have kept the fees as low as I could. Friends and acquaintances, including some who have recently begun teaching courses themselves, advised higher rates, given my prior experience as a writer and lecturer. But I prefer to be pragmatic at this point, especially given that this is the first time I am hosting something like this on my own. This is also why I am offering the payment-per-class option.

Meanwhile, as a value-addition of sorts, I will continue to host occasional informal discussions around old films I love, as and when time permits; all of you are welcome to attend those. As some of you know, the recent discussions around the film noirs Gun Crazy and In a Lonely Place went nicely, and it would be good to have more of those in the near future.

Those interested in either or both of these courses, please let me know at jaiarjun@gmail.com, along with your timings preference. I would also appreciate it if you could share these details with other film enthusiasts.
Posted by Jabberwock at 9:31 PM