The goonda as political commando - on Tigmanshu Dhulia's Bullett Raja

[Did a shorter version of this review for Business Standard]

“Halka paani ya bhadkeela?” is the question with which the friendship between Raja Mishra (Saif Ali Khan) and Rudra (Jimmy Shergill) begins. The setting is a wedding party and Rudra is asking Raja if he is fine with the soft drink he has just been offered or if he wants something flashier, more potent. Raja opts for the latter, and he certainly gets it over the course of this noisy film. After a few hours of bonding over liquor, banter and an item girl, the two men expertly fight off an attack on the wedding house, and so their fate is sealed: they are subsequently drawn into the politics and mafia wars of the UP heartland. It is as if the simple act of drinking “bhadkeela paani” has engendered events that turn a regular, job-seeking boy into a superhero, a goonda or a “political commando” (depending on your perspective). Even as Raja and Rudra retain their goofiness and basic likability, the stakes will keep rising for them. 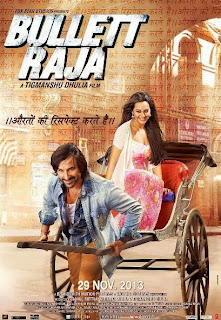 The opening credits of Tigmanshu Dhulia’s Bullett Raja are all about colour and flash and dhishum and dhishkiyaon, and that’s mostly what the film turns out to be too. Much has already been said about Dhulia, a director of grounded hinterland stories with well-written characters, making a no-holds-barred commercial film, a “potboiler”. Normally I’m wary of such classifications, but after watching Bullett Raja I had to concede the point. This is a clear homage to the mainstream Hindi film of the 1970s and 80s. There is a Sholay reference early on (“Hamesha do kyon hote hain?” – “Why are there always two?” – grumbles a head villain whose men have been vanquished by Raja and Rudra), and the very presence of Gulshan Grover, Chunky Pandey and Raj Babbar (all of whom are reasonably well used, with Pandey hamming it up from behind red-tinted glasses) is a reminder of less sophisticated masala movies from times past. Bullett Raja reaches for the tone of those films without trying to be a cheeky, post-modern commentary on them; there is even a scene – filmed straight, without irony – involving the death of a loved one and the hero swearing vengeance through the flames of a funeral pyre. 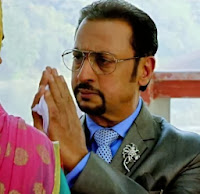 Is it a good potboiler though? I’m not so sure. Though entertaining enough in patches, this is also an uneven, unfocused film, with too much going on at the same time. Characters flit in and out of sight, there are promising but not fully realised roles for Ravi Kishan and Vidyut Jamwal (as men who are, in different ways, Raja’s nemeses), and Sonakshi Sinha’s Mitali – the love interest – is no more than a random presence (though perhaps this too is a nod to the functional part heroines played in 1980s action movies). Some scene transitions are jarring, there are discontinuities and gaps in character development, the action sequences are confusing and go by before one can register what is happening. (Martial-arts star Jamwal does have a couple of good fight scenes, though one of them – a prolonged one involving a stealth attack on a gang of dacoits – plays more as a personal setpiece for him, having little to do with the main narrative.)

Equally random are the film’s superficial excursions into political correctness, as in a scene involving a bellboy of Marathi origin and a little lesson about national unity. But then, Bullett Raja does unexpectedly become something of an India primer in its second half, first moving to Bombay for a bump-and-grind song in a posh pub, a view of skyscrapers and a glimpse of a film shoot involving Emraan Hashmi; then to Calcutta where Saif and Sonakshi romance against picturesque backdrops including Howrah Bridge and try to convince her sweet Bangla family of the seriousness of their relationship. In between, there is a trip to the Chambal Valley where we meet dakus (or baaghis) who dream of seeing Bipasha Basu dance while also dreaming of education and a better way of life for their children. 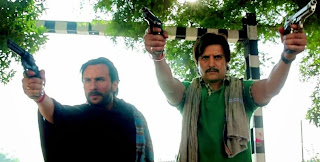 The world shown here then is one where modernity and older, more primal ways of life feed off each other. Feudal lines of power are very much in place, people in high positions spend time in jail purely for convenience and continue fixing deals – using Skype – while in their prison clothes; they speak in the salty dialects of their home town but nonchalantly break into English when you least expect it; meetings involving smartly dressed businessmen and politicians with their laptops take place in what seems the middle of a jungle. In this setting, it is always wise to touch the feet of hitmen, though you might – despite obligatory nods to piety and tradition – casually swat away a prasad-offering pandit who is interrupting an important conversation. And people, regardless of their origins, can be many things. Raja’s father, proud of their Brahmin ancestry, doesn’t want him to work in a hotel, washing other people’s jhootha dishes – but later we are reminded that “Brahmin rootha toh Ravana”. There are elderly men who are set in their hopelessly corrupt lifestyles (“Iss umar mein toh kaam badal nahin sakte” muses a businessman), and there are younger people who have more options available to them.

All this might have added up to subtle commentary on the many faces, divides and possibilities of a society, but that isn’t the kind of film Bullett Raja is trying to be. There is an inevitable reference in the Chambal scene to Dhulia’s Paan Singh Tomar, which was a much more restrained film about a man crossing over to the other side of the law and being unable to cross back. In a way, Bullett Raja is Paan Singh Lite or Paan Singh Happy. Escape and escapism are real possibilities here; they have to be, because a more commercial movie-making tradition requires the hero to be a survivor, so that an apparently tragic climax can later be revealed as something else altogether. Raja tells us at the very beginning that he has spent his life doing “aafat se aashiqui”. Expect him to do more of the same if there is a sequel, and to continue being as bullet-resistant as ever.

[A post about Dhulia's Paan Singh Tomar is here]
Posted by Jabberwock at 1:15 PM