In-film advertising is a common thing these days – much too common (I sometimes fall asleep in a hall even before a movie begins, in the time it takes for the list of sponsors and media partners to display). But what happens when a brand is so big and so representative of a way of life that its very appearance in a film – however fleeting – can add layers to the narrative? Take the case of Coca-colonization, a term that links the world’s most famous soft drink with American cultural imperialism (and with enterprise, vitality, crassness and all the other supposedly American qualities that infuriate and fascinate people around the world).

Coca-Cola and cinema are roughly the same age (the drink was first bottled in 1894, a year that also saw the first copyrighted American film, Fred Ott’s Sneeze) and they have had many pleasing meetings over the past century. Once in a while, Coke has been central to a film’s plot – Billy Wilder’s One Two Three has an executive trying to get the drink into the Russian market during the Cold War years – but more often it has made humorous cameo appearances, as in Wolfgang Becker’s Goodbye Lenin! where a bed-ridden German woman, unaware of the fall of the Berlin Wall, is startled by an enormous Coca-Cola banner outside her window. 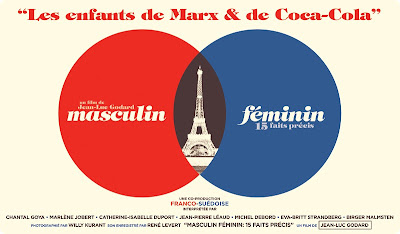 In movies by directors as different as Jean-Luc Godard and Frank Capra, Coke has been used to denounce or celebrate aspects of Americana. Sometimes both things have been done in the same sequence: in I am Cuba (which I wrote about here), a distraught farmer sets fire to his crop when he learns that his land is being sold to capitalists; but simultaneously, in a joyous scene set at a nearby bar, we see his children drinking Coca-Cola and dancing at a jukebox playing rock music.

A lovely early sequence in the 1946 British film A Matter of Life and Death takes place in a black-and-white Heaven where deceased soldiers from battlefields everywhere (rugged Sikhs and excitable Frenchmen among them) are just arriving. When a group of Americans burst in, the background music becomes loud and strident, almost as in a radio commercial. The soldiers survey this strange new place, then point excitedly at something; the camera draws back to reveal a Coke machine, and the Yanks are feeling right at home again.

In a film that is largely about the differences between the English and the Americans (and the need to come together for a common cause during WWII), this good-natured but wary scene suggests the ambivalent attitude of the former Empire to the brash young country that was about to become the next superpower. ("Officer's quarters, of course," says one of the armymen, Coke bottle still in hand, to Heaven's receptionist. "We're all the same up here, Captain," she replies stiffly.) 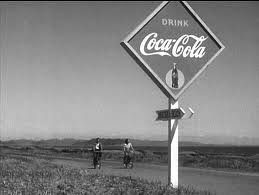 I confess to not having seen the 1950s Hindi film Miss Coca Cola, but the oldest instance I know of the use of Coke branding in a non-English-language movie is in the Ozu classic Late Spring (made in 1949, which was coincidentally the year Coca-Cola came to India for the first time). It’s just a two-second shot – as the heroine Noriko cycles with a male friend, we see a Coke ad in the foreground – but a notable one in a movie made just a few years after the war, and by a director who was known for calmly observing his society’s gradual shifts toward a more westernised way of life. (Here is a post about another later Ozu film Good Morning, in which television comes to Japan in the 1950s.)

My favourite cinematic Coke moments though are the ones that align comedy to subtle social observation. In the uproarious The Gods Must be Crazy, Kalahari bushmen discover an empty Coca-Cola bottle that introduces them to the concept of personal property; when this ferments feelings of envy and possessiveness, they decide that the ghastly object must be chucked off the edge of the world. But an equally funny – and more caustic – reference to Coke as a symbol of the Capitalist Way came in Stanley Kubrick’s Dr Strangelove. With the nuclear destruction of the world looming, a British group captain named Mandrake must get a crucial code across to the US president. He needs loose change for the phone booth, so he asks an American colonel, Guano, to destroy a nearby Coca-Cola machine and get a few coins out.
“That’s private property,” Guano bristles, “You’ll have to answer to the Coca-Cola company!”
The words are said with such reverence that there’s no missing the point: even at a time like this, corporate profit gets right of way. And when the Coke machine is eventually shot open, it’s almost like an apocalyptic prefiguring – because not long after this, the film ends with the planet blowing up. What we thought was just a fizzy drink turned out to be a cornerstone of our civilisation.
[If you remember any other notable Coke scenes in movies, please share them here]
Posted by Jabberwock at 9:23 AM