Up above the world so high...

One of the many pleasing things about Hindi cinema’s multi-starrer culture in the 1970s was the phenomenon of the “And Above All” in the title credits. This was fuelled by ego clashes and by a general tendency to fawn and mollycoddle: when two or more stars were equally popular and had been in the industry for around the same length of time, who would get top billing?

Such insecurity wasn’t peculiar to Bollywood, of course. In his book Tracy and Hepburn, Garson Kanin observed: “Billing appears to be as important as breathing to some actors and actresses. Important films with ideal casts have fallen apart on this issue.” Old Hollywood came up with inventive methods to keep prima donnas happy – for example, two names might be lettered in the shape of an “X” so that neither star could be said to have taken precedence. (If “Humphrey” was placed above “Ingrid”, at least “Bergman” was above “Bogart”.)

But in our movie industry “Above All” was the preferred solution, and if that failed it was always possible to proclaim a “guest” or “friendly” appearance – even when the actor in question had a substantial role. For a good example of title credits gone awry, I offer you Raj Kumar Kohli’s magnificent horror film Jaani Dushman, about a werewolf-like Shaitan with chest hair that would make Anil Kapoor look like the Glaxo baby. 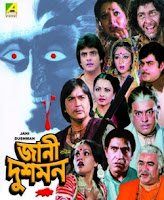 The film’s title sequence begins well enough with straightforward “starring” credits for Sunil Dutt, Sanjeev Kumar and Shatrughan Sinha (the hierarchy of seniority being apparent enough in this trio), but then things get murky. The next credit has Vinod Mehra with a parenthetical “Special Appearance” next to his name, almost as if he were reluctant to get too deeply involved. Likewise Rekha and a bevy of starlets including Neetu Singh, Bindiya Goswami and Sarika (all playing village belles ripe for abduction). But doing a solo number in the middle of all these special appearances is poor Reena Roy, whose name appears without any qualifiers at all. Possibly her agent failed to read the fine print?

Then comes a “Guest Artists” series – Yogita Bali, Aruna Irani and suchlike – followed by one of the more intricate credits I’ve seen:
And Above All
Jeetendra
(Special Appearance)
And so it goes. Briefly, here is a movie whose opening titles could be the subject of a thesis. (You can see them halfway through this video, but to get there you’ll have to watch 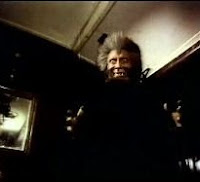 Amrish Puri reading “The Sixth Pan Book of Horror Stories” and making a monstrous transformation. The scene gives new meaning to the phrase “that book made my hair stand on end”.)

Come to think of it, Jeetendra had quite a romance going with special titles; his “Above All” billing in The Burning Train conjures images of the actor sitting mournfully by himself on the roof of the train compartment while the rest of the cast travels in comfort. (Alas, the credits of this film were so preoccupied with the male stars that they turned the luscious Parveen Babi into a man by spelling her name “Praveen”. Unforgivable.)

In that awful decade commonly referred to as the 1980s, some films exhausted all their creativity within the opening five minutes. Watching something called Do Qaidi on TV, I discovered the title “Dynamic Appearance by Suresh Oberoi” imposed on a still of the thus-honoured actor (who played a fairly inconsequential part in the film). What, one wonders, were these performers and their families thinking as they watched preview screenings? Did little Vivek Oberoi beam with delight when he saw daddy’s name appear on the screen? Did he tell himself, “I’ll grow up and become a movie star too, and then everyone in the whole wide world will call me Dynamic Vivek?” If so, think of the human tragedy unleashed by five words that appeared ever so briefly in a long-forgotten film. It gives new meaning to Larkin's verse about man handing on misery to man.

P.S. Here is Kanin on the subject of Spencer Tracy’s name always appearing before Katharine Hepburn’s in the films they did together:

Tracy’s position as a Metro superstar meant that there was nothing to discuss [...] It was always “Tracy and Hepburn”.

I chided him once about his insistence on first billing.

“Why not?” he asked, his face all innocence.

“This is a movie, chowderhead,” he said, “not a lifeboat.”

Posted by Jabberwock at 9:35 AM