“Are we not sinning?” the married woman asks the Godman. “He who sins in secret does not sin!” he replies, smacking his lips. Then he opens the curtains to his bedchamber, gives her a meaningful look and climbs in. Earlier in the day the expression on his face was that of a man rapt in communion with a higher power, but now he’s a satyr anticipating worldly pleasures.

The scene is from a silent film made 85 years ago – F W Murnau’s condensed treatment of the Moliere play Tartuffe – but it vaguely reminds me of the Swami Nithyanand sex videos. Though there were no TV sting operations in the 1920s, this sequence IS a sting of sorts: Madame Elmira has set up a nighttime tryst to convince her gullible husband Orgon (hiding outside the door, watching through the keyhole) that his friend Tartuffe is a hypocrite masquerading as an ascetic. The husband intervenes just in time to save her honour and cast the scoundrel out. All ends well.

Being a big fan of F W Murnau’s work – in particular Nosferatu, The Last Laugh, Sunrise and Faust – I was pleased to find this film on DVD. Story-wise, it’s a simple-minded morality tale and most modern-day viewers would find it difficult to work up much sympathy for Monsieur Orgon and his wife, members of the noble class who are in danger of losing their expensive jewellery to the fraudster Tartuffe; it’s hard to really see these people as victims. But while Tartuffe doesn’t stand up to

Murnau’s masterpieces, it’s still a very interesting film. There are visual connections to some of the director’s other work: for example, our first glimpse of Tartuffe (played by the great Emil Jannings) as he stiffly descends a staircase, prayer-book in front of his face, is spookily similar to solo shots of the vampire Nosferatu (even though Tartuffe looks like a well-fed cat while Nosferatu was lean and spider-like, and would never be caught dead - or Undead - with a prayer-book).

Murnau and his cinematographer, the legendary Karl Freund, repeat techniques that were used in The Last Laugh, and which were relatively new to filmmaking at the time: shooting from a low angle to make a character look threatening and predatory, or from a high angle to make someone seem small and helpless. There’s some brilliant self-indulgence too, as in the startling shot where Elmira weeps over a small photo of her husband that she keeps in a locket: a teardrop falls on the picture and slowly glides down his face, grossly enlarging each of his features as it goes.

But the really notable thing about Tartuffe is its unusual (for the time) use of the movie-within-a-movie technique. Its “framing” device is a contemporary story about a housekeeper persuading her nearly senile employer to disinherit his grandson and leave everything to her instead. (These lower classes! Always preying on the moneyed! And she’s slowly poisoning him too!) The grandson is turned out of the house, whereupon he breaks the fourth wall by scampering at the camera, removing his hat, looking directly at us, and saying, “You, who witnessed this scene, may rest assured that I shall not give in without a struggle! I shall rescue my grandfather from this humbug!”

Shortly afterwards, he arrives at the house disguised as the proprietor of a “touring cinema”. Ringing a bell vigorously, he proclaims that the film he wishes to screen is “a story about saints and sinners”. “We want no cinema!” sniffs the housekeeper from the window. “Pictures! Moving pictures! What nonsense!” snorts the old man. But they both give in and the boy sets up a screen, complete with little curtains, on the living-room wall. Then he blows the candles out, darkening the room, and starts the projector with a flourish. (There’s something mystical about this buildup. He resembles a conjuror about to display his cleverest trick - it made me think of the film The Illusionist.) The camera that has so far been showing us the framing story now moves into the screen on the wall, and the cautionary story of Tartuffe begins. 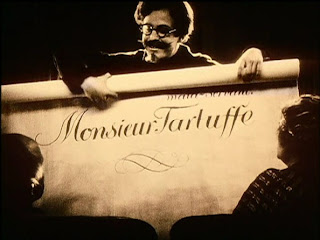 Cinema was relatively young in 1925, with lots of questions being asked about whether it was capable of raising people’s consciousness (as opposed to “simply” telling amusing stories). In Tartuffe, we see a pedantic demonstration of the medium's power to warn viewers about the evils around them. (The “lesson” being that the world is full of pious hypocrites and that there could be one sitting right next to you – perhaps watching the same film that you’re watching!) It’s self-conscious but it’s inventive, and a lot of fun. And when the boy starts playing the Tartuffe film, I can’t help thinking of the anchors on TV news channels today, hysterically ringing bells (in the form of “breaking news” flashes), claiming to hold up a mirror to our sordid times.

P.S. Orgon and Elmira are played by Werner Krauss and Lil Dagover, who also co-starred a few years earlier in The Cabinet of Dr Caligari. Krauss was only in his mid-thirties when he played the fierce-looking Caligari in that film, and his clean-shaven, goofy appearance in Tartuffe makes for quite a contrast to the earlier role. 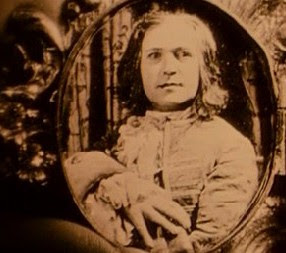 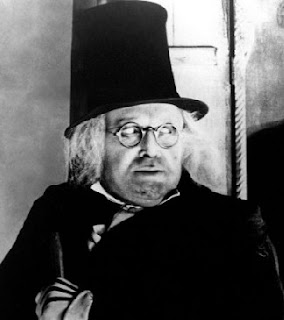 [Some earlier posts on silent films: The Passion of Joan of Arc, Nanook of the North, Robert Bloch and Lon Chaney, Mizoguchi and the benshi]