Dressing up a movie / Bhanu Athaiya's The Art of Costume Design

Even the most attentive movie-watchers – students of cinema, dedicated to exploring the nooks and crannies of the form – sometimes look at a film mainly in terms of its highest-profile elements: script, acting, cinematography. It’s when you spend some time on the sets of a movie, and watch the darn thing being monotonously assembled, that you begin to appreciate the small but vital cogs.

In Kerala, at the location shooting of Anup Kurian’s The Hunter last month (earlier posts here, here and here), I had a chat with Sarah Eapen, the film’s costumes-in-charge. Sarah’s notebook was full of charts for each day of the shooting, subdivided by scenes and characters, with little icons representing different sorts of T-shirts, scarves and so on. (The scenes involving elephants and cows had little smileys drawn beneath them, because she didn't have to attire those lumbering beasts of the wild.) But her job wasn’t merely to take actors’ measurements and collect outfits. She had to read the script carefully and think about the characters’ personalities: would a flamboyant hitman wear a bright pink shirt without stripes? Would a young medical student use red nail-polish or a more sombre shade? On a small production like this one, she also had to keep an eye on aspects of art direction and continuity. For example, in a scene where two people bury a beloved dog, she decided to use an old tribal shawl to wrap the body in (it chimed with other tribal associations in the script) – but this in turn made it important to establish the shawl as part of the film’s mise-en-scène, so it was shown being used as a makeshift tablecloth in an earlier scene.

And then there are the mundane tasks such as “ageing” newly bought clothes. Most of us don’t even think about these things while watching a film, but for a designer it entails creativity of a different sort – fraying the edges of trousers just so, ripping pockets delicately, even dipping clothes in tea and coffee to make them seem faded! Sarah, working with a very small budget, joked about how such things are taken for granted on bigger-budget movies, where they have “Ageing Departments”. 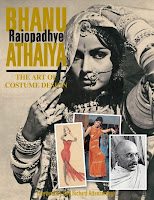 A subsequent meeting with the veteran designer Bhanu Athaiya, Oscar-winner for Richard Attenborough’s Gandhi, gave me a more historical perspective on Indian costume design. Still quite active at 82, Athaiya was in Delhi for the launch of her coffee-table memoir The Art of Costume Design, which combines informative text with sketches and photos of her work for films ranging from Shree 420 to Lagaan and Swades.

“Until the 1950s,” she told me, “Hindi cinema had hardly any costume designers in the modern sense of the term. It was all worked out between the directors and the set directors, who would call in tailors and give them instructions. Once in a while, if there was a very special requirement, they would go shopping for clothes.” No wonder then that Raj Kapoor, Guru Dutt and other directors of the time were taken with someone like Athaiya, who had not only studied art but had also traveled widely enough to know firsthand about regional trends in clothing and design. “I had an understanding of culture,” she says with quiet pride. Directors would narrate a scene to her and she would make a sketch within an hour and show it to them.

Given that Athaiya had artistic aspirations from an early age – she gave up a possible painting career in favour of costume designing for films – I was impressed by her pragmatic acknowledgement of costume design as something that must, first and foremost, fit the overall scheme of a movie. “It’s tempting for a talented designer to get carried away,” she says, “but the demands of the story are more important than designing beautiful outfits just to show off your abilities.”

At the same time, when a costume designer is permitted a high level of involvement in the scene-by-scene planning of the film, the results can be subtly effective. Using brightly coloured outfits for cheerful early scenes and gradually moving to duller shades to reflect the darkening mood of a story (something she did in Raj Kapoor’s Henna, for example) can establish atmosphere and provide visual cues, even if viewers register it only at a subconscious level. Unfortunately, says Athaiya, the star system has begun to interfere with the integrity of her discipline (as it has with so many others). “In the old days the directors made most of the decisions,” she says, “and they were naturally concerned with the overall welfare of the film. But in the past 10-15 years the actors have become more dominant. They end up having their own way when it comes to costumes, even if it conflicts with the film’s needs.”

As for the book – well, it’s very good to look at, with dozens of movie stills featuring Athaiya’s most iconic costumes: a fish-scale dress worn by Nargis in a dream sequence in Ek Tha Raja Ek Thi Rani (see pic), Sadhana’s form-fitting kurtas and churidaars in Waqt, Sunil Dutt and Vyjayanthimala’s period costumes for Amrapali, Waheeda Rahman’s bridal outfit in Reshma aur Shera. It’s priced at a steep Rs 2,500, but that’s the norm for a publication of this sort. The one thing I definitely didn’t like was the eight-page promotional spread for Tanishq Jewellery, blatantly inserted right in the middle, though it had no direct connection with Athaiya’s work. 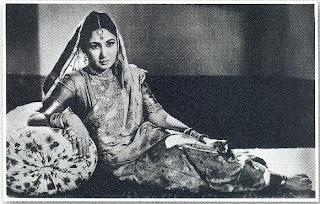 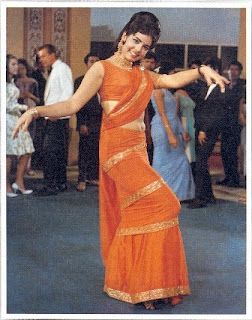 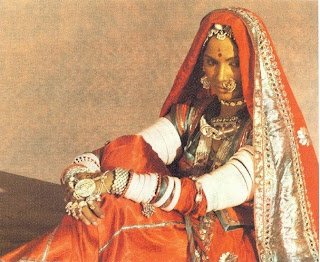 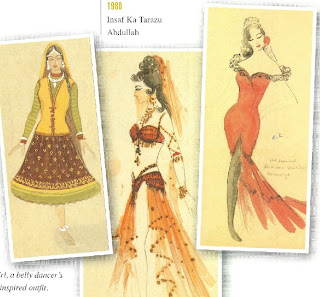 [Did a version of this for the Sunday Business Standard]

Posted by Jabberwock at 2:29 PM