Around two-thirds of the way into Vikram Chandra's massive new novel, there's a passage that might help explain why the author has packed such a wealth of detail into this book. Sartaj Singh, the Sikh police inspector who first appeared in Chandra's Love and Longing in Bombay, is trying to prevent a looming calamity, a possible nuclear plot. But he also has other, relatively minor cases to deal with on the side, and in a sense those are what sustain him through these difficult days. To escape his nightmares about sweeping fires and complete annihilation, to avoid being crippled by the larger picture, Sartaj tries to lose himself in the daily bustle of life. Stay with the details, he tells himself. The specifics are real. It was important, somehow, to care about Mrs Kamala Pandey and her sordid adultery and the chokra in the red T-shirt. He felt a loyalty to the ordinary, a sudden affection for her glossiness and her made-up face and her greed for glamour...

The subtext here is that to understand Sartaj Singh and this book’s other protagonist, the gangster Ganesh Gaitonde, it's important to know about the quotidian details of their lives – and in some cases, of other lives they come into contact with. The specifics are crucial to a meaningful portrayal of their worlds, and Chandra thoroughly explores those specifics, even to the extent of including long asides about tangential characters. 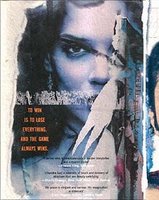 The book-jacket description makes Sacred Games sound like a cat-and-mouse story between the cop and the gangster, but this is misleading: the only encounter between Sartaj and Gaitonde (or at least the only one where each knows the other) occurs very early on, and both men are weary and beaten down in different ways. Gaitonde, driven into a state of paranoia, has ensconced himself in a strange, cube-shaped building in Kailashpada. Sartaj is outside, waiting for him to surrender. They talk, banter; Gaitonde starts telling Sartaj stories from his early life. Shortly afterwards, the door to the building is mowed down and the inspector goes in to find that the gangster's long and bloody career has finally ended at his own hands.

(Note to "spoiler"-phobes: all this happens within the first two chapters, so relax.)

Sartaj carries on with his regular routine: investigating murder and blackmail cases, helping his boss ferry "unofficial earnings" to a consultant, visiting the widow and children of a constable who died during a stakeout – and then learning to his shock that the Gaitonde episode isn't quite over yet, that something bigger is afoot. Meanwhile, in a charming narrative device, Gaitonde continues speaking to Sartaj (and us) from beyond the grave, telling the story of his rise to power, his triumphs and failures.

Sacred Games is an account of the intersecting lives of the policemen and the underworld – their clashes, their interdependence, how their biggest decisions come from the demands of surviving in the big city. In many ways Sartaj and Ganesh are two sides of the same coin, and Chandra underscores this by drawing many parallels between them. Again, the little details are important: the image of a severed foot forms a crucial part of each man's memory of the 1993 bomb blasts; Sartaj hums "Mehbooba Mehbooba" to himself while driving, and a couple of pages later there's Gaitonde watching Sholay for a second time; on different occasions and in unrelated contexts we see them frequenting the same places; each man is haunted by apocalyptic visions and by lack of sleep.

The search for identity, the making and remaking of it, is vital to their stories. Sartaj is discomfited by memories of his upright father, who an old acquaintance matter-of-factly (and resignedly) describes as "the only honest policeman I've ever known". It's a long shadow and he can't escape it; when a woman meets him privately and tries to pay him to investigate a case, he puts on an indignant front, threatens to arrest her for bribing a policeman – but his instinctive reaction on seeing the money is to snap, "Listen, this isn't enough!"

Gaitonde, on the other hand, is constantly redefining himself, or allowing himself to be redefined. When we hear about him in the third person, he is described as a "Hindu don", but the man we meet in his own narratives is initially indifferent to, or outright contemptuous of, the barriers people set up for themselves. (In a telling passage involving a young girl being forced into marriage against her will, he muses: I would have broken all their smug, snug heads open, if only that would have made any difference. But custom floats between men and women, it hides in the stomachs of children and escapes and expands and vanishes in every breath, you cannot kill it, you can only suffer it.)

But he accepts the mantle of Krishna bhakt and Hindu don as an exercise in image-building, and gradually comes to believe in his own legend. All gifts are betrayals, he reflects, Nothing is given to us without something larger being taken away...becoming Ganesh Gaitonde the Hindu bhai was itself an act of murder, it was the murder of a thousand and one other selves.

At one level, Sacred Games is a fast-paced thriller driven by conversation and incident (this aspect is stressed by the delightfully lurid cover, complete with gaudy title font and portraits of Gaitonde and Sartaj that bleed into each other, the faces sharing a common eye). But running between the pages of this book is another, more thoughtful, more cynical narrative about the nature of identity, and the endless and unknowable workings of action and reaction. This second book is driven by the characters' interior lives, their attempts to make some sense of their world, and their inherent nihilism.

Chandra's research and writing, his feel for his characters, are as assured as ever, and I particularly enjoyed the throwaway humour: like Gaitonde offhandedly mentioning that he and his boys used the code word "Iftekar" for policemen, the wickedly funny scene where a principled scriptwriter is corrupted by two 17-year-old Thai girls, another vignette involving a cantankerous old movie reviewer who trashes the film Gaitonde produces. (Chandra takes a few digs at members of his own profession, mainly in the form of writers taking themselves too seriously.)

But reading a book of this size, it's always possible to wonder how much detail is too much – and, conversely, how much can ever be enough. As Hurree babu points out in this column, the really large books make a very particular set of demands on the reader. You have to struggle with the things for days, move through chunks of 60 or 70 pages at a time, live with a set of characters for a long time. Muscles get sprained, the physical and mental investments made are big ones – and so, when such a book turns to be merely good rather than spectacular, the reward doesn't seem commensurate with the effort.

Despite being a reasonably patient reader, and someone who does this for a living, I felt this way at times with Sacred Games. Nearly all the bits that dealt directly with Sartaj or Ganesh are compelling – one exception being Gaitonde's spiritual odyssey, which is as tedious as similar passages in Kiran Nagarkar's God's Little Soldier – but the four "Insets", which add up to around 150 pages, are more problematic. Some of the material here, taken on its own terms, is as good as anything the author has done before – notably a flashback to the early life of Sartaj's mother, who lost her elder sister in Partition riots. But I was never convinced that it all belongs in this book.

When you have two characters as interesting as Gaitonde and Sartaj, you don't want to spend so much time away from them. Pared down, Sacred Games could have been a great 700-page, or maybe even 600-page, book. Whether it would have remained the very ambitious book Chandra set out to write is another matter entirely. (Given how meticulous he is, how many stories he has to tell and the number of years he's spent working on this, would even a 1200-pager have sufficed? Where does one stop when one sets out to write an epic?) In its current form it's a good enough read, with much that's rewarding and some bits that feel extraneous. I’m not sure that will be enough to satisfy the casual reader, say someone who gets through 15-20 books in a year and expects all of them to be paisa-vasool, as well as time-and-energy vasool. (My mom, who normally rejects anything that’s denser than Paulo Coelho, has finished Shantaram after months of effort, but that’s only because she’s in love with Gregory David Roberts.)