Have to second Godard on that. Watching my DVD of the Marx Brothers' Duck Soup, one of the very greatest of movie comedies, I come to a favourite scene, early in the film. The madcap Rufus T Firefly (played by who else but Groucho Marx, painted moustache and cigar firmly in place) has just been appointed leader of the tiny republic of Freedonia. The amply proportioned Mrs Gloria Teasdale has donated 20 million dollars to save the country from bankruptcy. Mrs Teasdale is played by the delightful Margaret Dumont, who was the prime target for Groucho's many insults in film after film, and this is the first scene between the two in this movie. Naturally, Groucho lays into the woman with his trademark machine-gun delivery of non-sequiturs.

Mrs Teasdale (gushing profusely): As chairwoman of the reception committee, I welcome you with open arms.

Firefly (snapping back): Is that so? How late do you stay open?

Mrs Teasdale (recovering with aplomb): I've sponsored your appointment because I feel you are the most able statesman in all Freedonia.

(Groucho delivers the above lines at what seems like 10 words a second.)

The subject of Mrs Teasdale's late husband comes up.

Firefly: Will you marry me? Did he leave you any money? Answer the second question first.

Mrs Teasdale: He left me his entire fortune.

Firefly: Is that so? Can't you see what I'm trying to tell you, I love you!

Mrs Teasdale (rolling her eyes in adoration): Oh, your Excellency!

Firefly (rolling his in imitation): You're not so bad yourself.

And so on. Much as I'd like to, I can't quote all of Groucho's dialogue here - it would take up too much space and it would be pointless anyway, because to appreciate it in the truest sense you have to watch and hear him saying it.

Duck Soup is a brilliant, subversive film about petty politicking and war-mongering, much more potent a satire than Chaplin's The Great Dictator (which was made seven years later). I've heard criticisms about how it doesn't have much of a storyline, that it's just a stitched-together collection of jokes and gags - but this isn't fair. Here's the basic plot: Ambassador of Sylvania calls President of Freedonia an upstart. Latter smacks former with a pair of rubber gloves. Former declares war on latter's country.

That's a good enough storyline for any film, in my ever-so-humble view. But with so much brilliance from the finest set of comedians of the talking era, why would this one need a plot anyway? Like many other Marx Brothers aficionados, I sometimes find it difficult to look beyond Groucho - but Duck Soup provides Chico and Harpo (as a pair of spies) with some of their finest moments too: especially in the running gag about Harpo producing just about anything on demand, including a flaming blowtorch that he has hidden in a coat pocket. And the scene where a real dog emerges, barking, from a house painted on his chest is worthy of a Dali-Bunuel collaboration.

Anyway, watching Duck Soup again, I noticed a few things that hadn't occurred to me before. Firstly, all this talk about Groucho's dialogue delivery being deadpan. In a sense, it is - his voice is completely flat, even when he's saying the absurdest things (which is what makes it so funny). But he isn't straight-faced in the Buster Keaton style: watch his expression after he's tossed off a few insults and is puffing at his cigar before launching into the next round. He always has this amused little look, this slight smile that suggests he's privately surprised people put up with him for as long as they do. This, remember, is the man who once famously said, "I wouldn't want to belong to any club that would want me as a member". (Of course, he also said, "Someday I'd like to join a club and beat you over the head with it.") 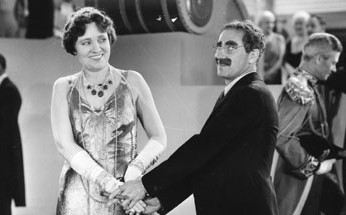 The other thing that struck me was how important Margaret Dumont's own personality is in the scenes between her and Groucho. Conventional wisdom tells us that her role in these films was to be a mere foil, a bouncing board for Groucho's lines. But that isn't quite accurate. One of the reasons why the exchanges between them work so well is that Dumont is always so good-natured. At most, when Groucho says something particularly insulting, her brows furrow and she looks around, flustered - but then, a couple of seconds later, she's back to smiling luminously at him. It's almost like a fond aunt indulging a loopy nephew. They get my vote for the Greatest Onscreen Couple ever.

Links: A comprehensive scene-by-scene write-up on the film from Tim Dirks' Film Site. And a nice collection of Groucho quotes.

"Take two turkeys, one goose, four cabbages, but no duck, and mix them together. After one taste, you'll duck soup for the rest of your life." - Groucho Marx
Posted by Jabberwock at 11:19 PM