There and back again

Back from the literary fest in Jaipur. Had a decent time on the whole though it began badly – I was felled by motion sickness on the way there and ended up spending the entire first day in a headachey haze. Monday was much better though. Attended readings/talks by Hari Kunzru, Namita Gokhale, William Dalrymple, Anita Roy, Vivek Narayanan and Shobhaa De (who predictably had the largest audience and the longest line of autograph/byte-seeking admirers with the most reverential looks on their faces), and managed a couple of short interviews. Not a lavish event or anything but pretty well organised given that it was the first edition of the festival, put together on a small budget, and that some last-minute cancellations threw the schedule out of gear.

It wouldn’t have been much fun if I’d gone alone though. Nikhil and Chandrahas were great company (excepting this shared character flaw that they are Rahul Dravid fans and wanted to watch highlights of his century at the same time that Indian Idol was on. This is unacceptable). Nikhil is as smart-alecky in real life as in blog meets (though at heart he’s a sweet young lad, not the devil’s advocate he likes to think he is), while Chandrahas – already a reputed lit-blogger, honorary Russian, short-story writer and master of the thoughtful, faraway expression – showed an unforeseen talent for making up wordgames, like the one where you form a never-ending chain out of the names of Pakistani cricketers (Mohamed Yousuf-->Mohammed Akram-->Wasim Akram-->Wasim Raja and so on).

Will blog about the fest in detail later. For now, I’m faced with the terrifying prospect of checking email and Bloglines updates after being away from the Internet for three days. It really is very frightening, especially when one is on many different mailing groups. (Which reminds me – Desicritics, a promising new group blog, is launching very soon, so do keep an eye out for it.) 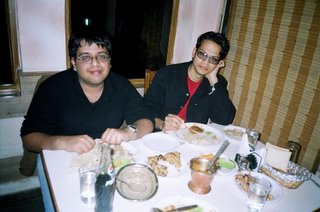 Nikhil looking sweet and dear-boyish, and Chandrahas with trademark thoughtful expression (in truth, they’re both sated by the large kabab-ish dinner we had just to show that Amit Varma chap). 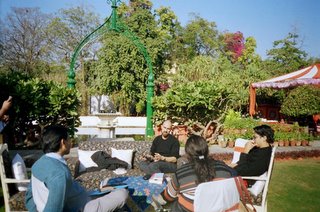 Chandrahas (right) looks thoughtful and Russian as Hari Kunzru (centre) holds court.
[Click on pics to enlarge. And apologies for poor quality – this is my cue to run out and buy that digital camera I’ve been putting off for so long. Recommendations welcome.]

Posted by Jabberwock at 8:09 PM