Here’s the first draft of the travel story I’ve done on my visit to Bir. Was too lazy to write a separate, informal version for the blog so am just putting this up instead. There’ll be some revisions and additions in the final published article.

(P.S. Veddy veddy sorry about use of present tense.)

Me and the mountains

In Anthony Burgess’s A Clockwork Orange, the effect of the "corrective" Ludovico Treatment on the delinquent Alex is to make him violently sick whenever he tries to do the things that most appeal to him. At times I can empathise with the young thug. I love the mountains. Travelling on them makes me very ill. And my heart rises and sinks with dangerous simultaneity at the thought of a two-day sojourn to the hills, where a day and a half will perforce be spent on the move.

The good thing about this condition though is that it makes a few decisions easier. For anyone who’s on a timebound trip to the mountains, there’s a natural conflict. You can choose to get to know one place really well - make it your base, stay put, explore the immediate vicinity at leisure. The other option is to do a lot in limited time, drive greedily about in an attempt to hold on to the memory of numerous beautiful vistas -- like the monkey with his fist in the sweet jar - and risk not remembering any of them well enough. But if, as in my case, motion sickness is a factor, you’re best advised to stick with the first option.

Bir, a small hill town near Palampur in Himachal Pradesh, is my principal destination for a story on a recently inaugurated monastic university. From Delhi, one can take an overnight train to Pathankot (the nearest railway station) followed by a four-hour cab drive to Bir, or else a 12-hour bus directly to Palampur. Wanting to keep road travel to a minimum, I choose the former option.

The cab drive is a haze since I’m focusing intently on the latest updates from my digestive system, but I do register a few things: the almost-instant change in scenery as we cross the border from plained Punjab into hilled Himachal; the graceful Shiv mandir cut into the side of a mountain in Trilokpuri; the distant tea-estates near Palampur; the famous temples in Baijnath, including one reputedly built in a day by the Pandava brothers, or so the cab driver tells me; and soon enough the mountains of the beautiful Dhauladhar range, snow cladding their upper reaches (as I contemplate that ceiling fans have already been pressed into service back where I come from). 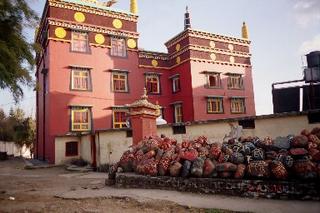 It’s 12 PM when we reach Bir. The Chokling monastery in the town’s Tibetan colony is where I have to be, but the colony isn’t easy to find since it’s some way off from the rest of the town; when we ask for directions, the word "monastery" produces uncomprehending looks and replies of "ministri?" Eventually I gather that the best way to describe what I’m looking for is to say "Buddhist mandir", and then we’re on the right track.

My contact person, the ever-affable Pema Wangchuk - who allows himself to be described only as a "servant of the monastery" when I foolishly ask for designation details -- meets me at the Chokling guesthouse, where I’m to stay. "You’re very lucky," he assures me, "Until just yesterday, the weather in these parts was miserable - raining continuously." I’m quite surprised myself at how pleasant and sunny it is - though I’m fated to pay for this round of good fortune later at night, when the mountains will shed their benignity and send icy winds down into the room I’m sleeping in. But that’s still a few hours away.

Pema introduces me to some of the senior monks and watching them interact with each other I’m reminded that Buddhism - or what little I’ve seen of it - has almost none of the external trappings of piety. You sense the halo’s presence but never once see the monks adjusting it around their heads. They shout boisterously across to each other, even joke in a manner that suggests locker-room talk (I didn’t understand the language so can’t confirm), eat meat with relish, play football, carry cellphones with "Saamne Yeh Kaun Aaya" ringtones, ride motorbikes that whiz dangerously along the winding mountain lanes. But the gentleness is there all right, completely unforced. It comes through in the unsuccessful attempt at sternness by one of the monks when he tries to shush the barking monastery dog ("He’s from Delhi, and very aggressive," I’m told without irony). And it’s there in the calm, unfazed way they answer the questions I ceaselessly hurl at them. 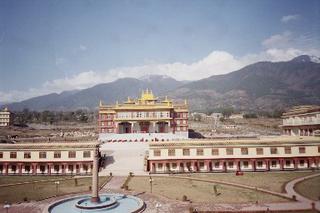 Though Lama Sonam Phuntsho - one of the few monks here who’s fluent in English - gives me background information about the Chokyi Llodro monastic university, I get a real sense of the place only when Pema takes me across for a visit. We clatter along in a jalopy straight out of those Ealing Studio comedies from the 1950s, turn a corner and there it is: a sprawling campus with accommodation quarters for nearly 1,000 monks. It’s hard to believe an institution this impressive could be tucked away in what seems a tiny corner of the hills.

This is the new campus for a school with a history that goes back to a monastic shedra first established in eastern Tibet in the late 19th century. The campus gets more breathtaking the more one explores it; the Lama takes me to the accommodation building’s terrace, which affords a stunning view of the breadth of the 10-acre university: the Ashoka pillar in the centre of the lawns flanked by the accommodation quarters; the kitchen block to the left; the library block and VIP quarters to the right; solar water heaters visible on a distant terrace; and of course the main monastery - containing the classrooms and a 4,000-capacity assembly hall - directly in front. Work is currently underway on a health clinic as well as on recreational facilities including a football field, a volleyball court, and even a cricket pitch. "Many of the students here are cricket-crazy," says Lama Phuntsho ruefully; he's no bails-and-willow fan himself. 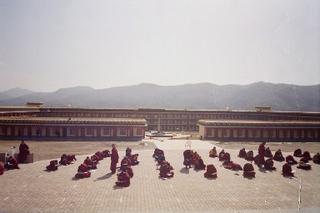 It’s examination time at the college, but exams were never like this in the school I went to. Rowsof student monks sit in the enormous courtyard outside the monastery scribbling away, casting each other surreptitious glances, while invigilators take rounds. A smiling attendant serves generous helpings of Tibetan butter milk and biscuits and keeps up a regular supply of boiled sweets and dried fruit for the invigilators. The serenity of the setting is almost beyond description. 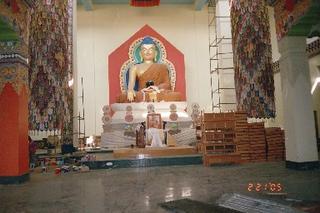 Throw in the austere peaks of the Dhauladhar maintaining their own vigil in the background and it makes me never want to leave, but a few cups of tea and many sighs of contentment later we’re back in Bir. In the evening I explore the vicinity of the Chokling monastery with its beautiful sacred stones, a recently built stupa around which worshippers perambulate in the mornings, offering prayers, and the "Labrang" (Tibetan for "house"), where the senior monks reside. One of the Lamas takes me inside the small assembly hall adjoining the Labrang. "You don’t have to take off your shoes," he tells me; there are small rectangular "foot mats" on which one can glide about the room. It’s a strange feeling shuffling about a prayer room with a monk, like an amateur ice skater.

Dinner is a delectable mixed thenthup, with everything in it -- flour, egg, meats, vegetables. After watching a puja involving a mask dance and haunting drum-based music in the monastery courtyard, I retire early to my room and discover that U2 was right. Sleep comes like a drug in God’s country - despite the biting cold that sets in around 9 PM.

Morning, and with the solar heaters not yet working, I carry a bucket of boiling water from the canteen kitchen up to my room. Which is good, the exercise helps warm me up.

My work in Bir done, and with the evening train to catch at Pathankot, I decide I have just enough time for a two-hour trip to McLeodganj, which isn’t far out of the way. Waving goodbye to Pema and the monks, and promising them (and myself) I’ll be back soon, I set off by cab again. For some reason, the drive is more relaxed this time. But as we pass Dharamsala and begin the climb to McLeodganj, where the Dalai Lama has lived for over 40 years, the road gets much steeper than any I’ve yet encountered. Worse, we suddenly find ourselves in the midst of a traffic jam that would have done rush-hour Delhi proud. The cause for the rush, it transpires, is a puja taking place in a monastery very near the Dalai Lama’s residence.

To save time, I get out of the cab and arrange to meet the driver later. Walking along the marketplace, squeezing my way through rows of honking cars and over-enthusiastic shoppers, I reflect on the irony that this serene religion should have such a noisy, bustling place as its spiritual centre. After the calm of Bir and the Chokling monastery, it’s a little disenchanting and I even begin to wonder whether it was a good idea to come to this tourist-and-worshipper-saturated place.

However, the feeling doesn’t last long. After strolling around the market centre, looking at the shops with prayer bowls, wheels and other artefacts on sale, I step into a cafe a little way off the main road. Two monks are sitting at a nearby table, murmuring softly to each other over bowls of soup and suddenly, I’m transported. The traffic outside hasn’t abated, hawkers and tourists are still arguing furiously over prices, and I know I’ll be back at Pathankot station in just a couple of hours. But for now, listening to the sound of these gentle voices, all of that seems irrelevant.
Posted by Jabberwock at 5:50 PM