Time out of joint: Stephen King revisits a "foreign country"

[Did a shorter version of this for the Sunday Guardian]

Entirely without planning, Stephen King became a major theme in my reading last week. It began with his fine short story “The Dune”, included in the Granta Horror special (here's a post about that book). Then, despite my reluctance these days to commit to a really bulky book, I became hooked to King’s new 740-page novel 11.22.63, which is a time-travel story sprinkled with social observation about the late 1950s and early 60s – a key time (it can be said with the benefit of hindsight) in America’s social, cultural and political development. The date in the book’s title – November 22, 1963 – is of course a historical touchstone, and it must have special significance for an American of King’s age; he was 16 when John F Kennedy was killed in Dallas. 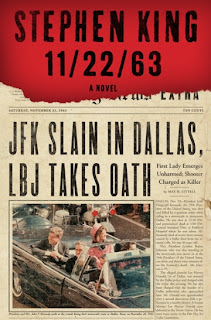 A romantic view of things has it that if the hugely popular president had lived and won a second term, the long-term effects for his country would mostly have been positive – for instance, the Vietnam War, which set a pattern for American hegemony around the world and created deep psychological scars for the Baby Boomers of King’s generation, might have been avoided. It’s easy then to see an element of wish-fulfilment in King’s story about a man who has the tools to change history: a good, inventive novelist is well-placed to engage in vicarious wish-fulfilment of this sort. But I think 11.22.63 came equally from his desire to simply revisit the world of his childhood and to imagine what that distant world might look like to someone who never experienced it firsthand. (Even though I’m only in my thirties, I can relate to that manner of nostalgia. I sometimes think what fun it would be to take some of the smugger 18-year-olds of today and deposit them into the pre-Internet, pre-satellite TV, pre-cellphone India of 1985, without any warning about what to expect!)

King’s protagonist is Jake Epping, a 35-year-old English teacher who gains access to a portal that opens into September 1958. The rules of the game are quickly established: a traveller can go back in time, stay for as long as he wants to, and return to the present via the portal; only two minutes will have elapsed in 2011 (regardless of how long he was away), but he will have aged by whatever period he spent in the past. And crucially, each time he uses the portal will mark a “reset” – as in Groundhog Day, all of his encounters and actions in the previous visit will be erased.

The discoverer of the portal, a diner-owner named Al, is old and dying; he has lived nearly five years in the past, attempted and failed to prevent the Kennedy assassination, and he doesn’t have the option of going through the process again. So he turns to Jake for assistance. And it’s here that King introduces a sub-plot that makes his book more complex than you might think if you read just the back-cover blurb. Jake’s initial motivation for time-travelling involves something much more low-key (in the larger scheme of things) than the Kennedy killing: he has recently read an essay written by an old janitor, Harry Dunning, whose mother and siblings were murdered by his violent father on Halloween 1958, and this seems like a god-sent opportunity to alter the destinies of that poor family.

In other words, the “watershed moment” that stirs Jake most isn’t the one in American history textbooks – it’s the one in the personal history of this anonymous old man. This tension between Big Events and seemingly unexceptional lives will become one of the most interesting things about the novel.

The subplot about Frank Dunning, the ticking time-bomb, serves a purpose both within Jake’s story and for King as a novelist gradually building suspense, shifting from one meter to the next. It’s a dress rehearsal of sorts for Jake, with Dunning cast as the relatively small-time adversary he must face before the much more tricky business of dealing with Lee Harvey Oswald and his possible associates. And for King, it helps set in place one of the central ideas in this novel: that the past is “obdurate” and resistant to change. The bigger the stakes, the more difficult Jake’s mission will become. (On the day he has to stop Dunning, he wakes up with a crippling stomach infection that almost renders him immobile; so how much worse will things get when he has to alter the destiny of the US president?)
****
The first 250 or so pages of this book – which includes two excursions into the past and two attempts by Jake to stop Dunning from killing his family – are pure thriller, laced with period detail, and it’s this section that is most likely to appeal to the casual reader. (With a few minor changes, I think this first third could have made a fine novel in its own right.) To fully enjoy the rest of the book – where Jake starts tracking the movements of that young, Russia-returned malcontent Oswald and his perplexed wife Marina – it helps to have a basic interest in the Kennedy assassination. But it isn’t imperative. In a way, JFK and Lee Harvey Oswald are Macguffins: King is really building our interest in his fictional creations, starting with Jake, Al and the mentally feeble janitor whose world fell apart when he was just 10 years old – but eventually also Sadie, the woman Jake falls in love with. Beyond a point, I stopped thinking about real history and instead became involved in this imagined world.

On the question of whether 11.22.63 needed to be as lengthy as it is, I’m undecided. King is a master of the brisk narrative, but at times I found myself losing patience and skimming over paragraphs; there are a few dispensable subplots and details, and careful editing could have cut this down by 100 to 150 pages without losing the qualities that make it such a good novel. At the same time, this is a very large canvas and a case can be made that it deserves epic treatment.

As a work of speculative fiction, this novel plays with such ideas as the Butterfly Effect and the ever-tantalising “What if?” question. (Jake and Al assume that the prevention of Kennedy’s assassination would have positive long-term effects, but what if saving the president changes the future in countless other ways that couldn’t yet be imagined?) It raises the possibility that history is full of mysterious recurrences and echoes (the past harmonizes with itself, Jake muses to himself, as he notes little connections between the people he meets and the inadvertent repetitions in his own actions). It’s also a persuasive love story, with a lonely man finding a home – and an intense, meaningful relationship – in this new world and wondering if he even wants to return to the place he came from (or even if his life in 2011 was an elaborate hallucination). 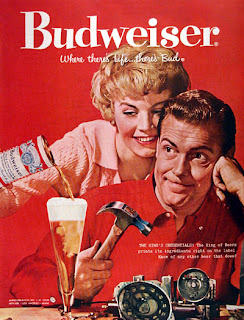 And of course it’s about the idea of the past as a foreign country, where (to quote L P Hartley) people do things differently. One of Jake’s first tangible sensations of 1958 is the wholesome taste of beer: “I sipped through the foam on top and was amazed. It was... full. Tasty all the way through. I don’t know how to express it any better than that. This fifty-years-gone world smelled worse than I ever would have expected, but it tasted a whole hell of a lot better.” Other details build up, with references to advertisements, TV shows, popular culture and the social mores and prejudices of the time; Jake has to process 1950s slang and accents whenever he speaks to anyone, and must be cautious himself about using phrases that have not yet come into existence. But there is also a caution against idealising an old way of life. In one significant passage Jake is shaken out of his living nostalgia for the “fresher” world of 1958 when he sees a makeshift outdoor toilet for “Coloured” people, located near a clump of poison ivy. He also has firsthand experience of the ugly nature of small-town gossip in a society that is still very conservative in many ways.
King must have had a great time working on this book, supplementing his boyhood memories with hard research. His affection for the period and his reluctance to over-romanticise it come through in equal measure, and at its best 11.22.63 is a terrific mix of the usual time-travel paradoxes and light social commentary on a bygone time. You need a bit of patience to read the whole thing though.
Posted by Jabberwock at 9:49 AM