[Did a version of this for Business Standard] 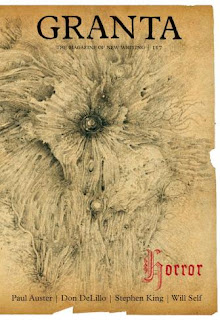 The cover of the new Granta has the word “Horror” in a vaguely Gothic font beneath a drawing of a fibrous blob with gooey things peering from its depths – the sort of thing H P Lovecraft’s Cthulhu might have birthed on a cold day. This could lead a reader to expect a collection of supernatural tales in the classic horror tradition, but what emerges is something subtler and more wide-ranging – perhaps too wide-ranging at times. When the word makes its first appearance inside the book – in Will Self’s “False Blood” – the reference is to the author’s long-time drug addiction (“that horror has cast a long shadow over my lives and the lives of my family, and infiltrated my fictive inscape, poisoning its field margins, salting its earth”). A theme is established: these pieces aren’t just about malevolent spirits that might assail us from without – they are also about inner betrayals of mind and body.

Thus, “horror” can mean looking down at the dead body of the woman who gave birth to you. (From Paul Auster’s “Your Birthday Has Come and Gone”, an excerpt from his forthcoming memoir, written in the second person: “You have seen several corpses in the past, and you are familiar with the inertness of the dead...but none of those corpses belonged to your mother, no other dead body was the body in which your own life began, and you can look for no more than a few seconds before you turn your head away.”) It can also mean being in a sleep-deprived, drunken state two days after the cremation, answering a phone call to find yourself verbally assailed by a sanctimonious cousin who disapproved of the dead woman’s character and has no compunctions about expressing her feelings.
Nearly as intense as Auster’s account is Julie Otsuka’s poetic “Diem Perdidi”, about another mother suffering from Alzheimer’s, while Kanitta Meechubott’s “A Garden of Illuminating Existence” is a series of hypnotic illustrations that tell the story – in nine intricate colour plates – of her grandmother’s bout with cancer of the womb. In an eerie echo of Auster’s “the body in which your own life began”, the very place that is meant to nourish life becomes a sort of hell where “the pain spreads like a great forest fire”. What greater horror could be imagined? (You can see Meechubott's illustrations here.) 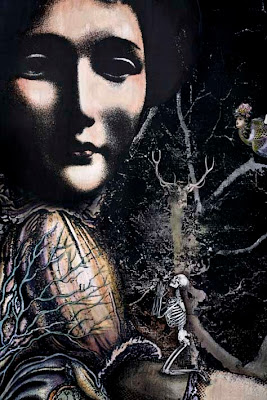 I thought the most intriguing pieces were the ones that mixed tones, weaving genre tropes into real-world narratives. Self’s essay, for instance, is a reminder of how versatile a thing blood can be, mundane, mystical or terrifying depending on the context – it’s a life-force but also a traitor, and an enduring prop in the horror and gore genres. He begins with the words “Sometime over the winter of 2010-11 I began to be gorged with blood, or rather, my blood itself began to be gorged with red blood cells.” (This isn’t good news for him, but what wouldn’t a vampire give to be similarly “gorged”?) The piece also includes a morbid anecdote about a man who used his own siphoned-out, iron-rich blood as a fertiliser for pumpkins (“vampiric gourds”) – a detail that is tantalisingly close to all those pulp stories about carnivorous plants.

“Is vampirism a matter of the overly self-conscious being awakened to life by the vitality of those who are barely self-conscious at all?” wonders Mark Doty in “Insatiable”. But mark the context: this is from Doty’s book about the poet Walt Whitman, and it builds on the possibility that Bram Stoker, author of Dracula, based his vampire on Whitman. (The sentence immediately after the one quoted above reads: “Is that why Whitman liked stevedores and streetcar conductors and Long Island baymen, the big guys at home in their bodies, who would never think to write a poem?”) How could “the embodiment of lunar pallor” emerge from “the quintessential poet of affirmation”, Doty wonders, and attempts to answer his own question in a piece that touches on the bloodsucking implicit in art, and on the hints of vampirism in the relationship between a poet and his readers. (“Great poets are, by definition, undead. The voice is preserved in the warm saline of ink and of memory.”)

There are a few fiction pieces, of course, and some of them concern horrors of the mind. Joy Williams’ “Brass” and Don DeLillo’s “The Starveling” are about different kinds of isolated people: the first is in the voice of a small-town father whose boy will become a sociopath; in the second, an obsessive movie-watcher follows a woman who could be a kindred spirit, a doppelganger or perhaps just a creature of his imagination. And Sarah Hall’s atmospheric “She Murdered Mortal He” is mainly about the inner turmoil of a woman on the verge of a break-up, but leaves us wondering at the end if her emotions might have summoned up a bloody vengeance. 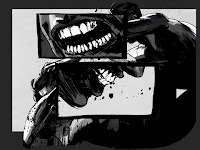 Meanwhile horror buffs with a sense of humour should enjoy Roberto Bolano’s “The Colonel’s Son”, which is essentially a plot description of a C-grade zombie movie so bad it’s brilliant.

“...there’s only the sound of biting and chewing until the door opens and Julie appears again with her lips (the whole of her face, actually) smeared with blood, holding the Mexican’s head in one hand.

Which makes the other Mexican crazy; he pulls out a pistol, goes up and empties into the girl, but of course the bullets don’t harm her at all and Julie laughs contentedly before grabbing the guy’s shirt, pulling him towards her and tearing his throat open with a single bite.”

(Also see this animation inspired by Bolano's piece)
But the piece that best fits the conventional definition of a horror tale is Stephen King’s “The Dune”, about a nonagenarian judge who has been obsessed since age 10 with an island a short rowing distance from his Florida estate. What draws the judge back to this place is something we learn as the story proceeds – and it builds to a conclusion that should satisfy any genre fan – but as in all of King’s best work, there is a deeper current. This story, which begins with a reflection on how human bodies deteriorate with age, touches on our foreknowledge of mortality and the attempt to beat it off; it’s also a reminder of how fleeting our lifetimes are when measured against larger forces. (I thought there was a moving subtext here: the old man has changed immeasurably, accumulating a lifetime’s worth of experiences, over the 80 years he has known the island, but the island itself remains as still and unchangeable as ever, and will continue to be so long after he is gone.)

There’s little to fault in this book if you consider just the quality of the writing, but I had a minor reservation about the two reportage-driven pieces – Tom Bamforth’s chronicle of a UN mission in Sudan and Santiago Roncagliolo’s personal account of terrorism in Peru. These are good long-form journalistic essays, but do they belong here? If the broadest possible meaning of “horror” is to be used, then of course the answer is yes. But a thematic collection that accommodates such a wide spectrum of fiction, personal memoir and reportage is a little too diffused for my liking. (For a really broad interpretation of the word, why not include one of P G Wodehouse's Blandings Castle stories on the grounds that the absence of Blandings from the real world is the most terrifying thing one can think of?) Besides, the book’s back-cover quotes Arthur Conan Doyle as saying “Where there is no imagination there is no horror.” But I'm not sure the Sudan and Peru essays, matter-of-factly listing real-world monstrosities, require quite the same level of imaginative participation from the reader as the other pieces here do.
Posted by Jabberwock at 9:54 AM