On Cyrus Mistry's Chronicle of a Corpse-Bearer

[Did a version of this review for Tehelka]

The narrator-protagonist of Cyrus Mistry’s new novel is born into a life of religious privilege but forsakes it for a much less reputable existence. Though the son of a Parsi head priest, Phiroze Elchidana quickly tires of “holy smoke, salutary fragrances and workday miracles” and develops a rebellious streak. “The older I grew the more absurd any requirement of pomposity or piety seemed.” Like the hero of a similarly plaintive novel, M G Vassanji’s The Assassin’s Song – about a Pir shrine heir carrying the burden of divinity – Phiroze dreams of escaping “the narrow, claustral world of the fire temple”. But escape comes in an unusual form: he ends up plying the trade of a khandhiah or corpse-bearer, meditating on the inscrutability of death and lamenting a lost love.

Properly speaking, Phiroze’s narrative spans eight decades (he relates it as an octogenarian in the mid-1990s), but the meat of the story is set in the years leading up to Independence, when the key events of his life take place. Having already disappointed his family by failing his exams, he falls for Sepideh, the daughter of a khandhiah, in a “lush arboreal kingdom” (the grounds of south Bombay’s Tower of Silence, to which Parsi corpses are carried for their final rendezvous with vultures). He marries her in defiance of his father, loses her a few years later when she is bitten by a snake (in their personal Garden of Eden, no less), and soon afterwards participates with his fellow khandhiahs in a non-cooperation movement that parallels Mahatma Gandhi’s Quit India call.

This is a wide-ranging tale and there are things to admire in it – not least Mistry’s feel for lives that are under-represented in our literature: the Parsi community’s marginalised members, facing social disapprobation, hypocrisy and unfair working conditions even as a modern city, with its “throbbing nervous energy”, comes up around them. There are moving passages such as the one where Phiroze, after yielding to the sexual advances of a loathsome contractor – hitherto presented as a stock villain –reflects that the experience wasn’t as odious as he thought it would be. “I felt, after a very long time, human again; grateful to Buchia that he saw me as more than just some cadaverous, unclean thing whose very breath it was undesirable to commingle with.” 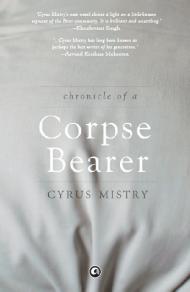 Unfortunately, what at first appears to be a deliberately melancholy tone – suited to this weary man – soon comes to seem like storytelling slackness, as Phiroze rambles on about a variety of subjects without really dwelling on any. Many of the brief asides, such as the one about Hitler’s exclusion of Jewish athletes from the 1936 Olympics (not without relevance to this tale about discrimination), are not organically woven into the narrative but presented as discrete information. There is an unevenness in the writing too. Phiroze (or should one say Mistry) mostly employs the coolly elegant style one associates with much of pre-Rushdie Indian Anglophone literature, but every now and then there is an attempt to be chatty and informal. Thus, a chunk of text is put in parentheses as Phiroze interrupts himself to supply incidental information; a stray sentence begins “Can’t remember if I mentioned this earlier...”.

It might in fact have been better if this were the dominant mode – elliptical, hesitant, vulnerable. As it is, the refinement of the narrative sometimes becomes a barrier to grasping Phiroze’s feelings. (“Seppy, I do miss you very much,” he writes, “If only you were still here with me, I wouldn’t be afraid.”) The effect is of constantly being told about an intense, all-consuming relationship – and the effect it has had on a life – without actually getting to feel its depth. And it doesn’t help that Sepideh herself is practically absent from the narrative – an odd thing in a work described by its publisher as “a moving account of tragic love”. In fairness, Phiroze does attempt to explain this: “Seppy’s gone, and because she’s no more, I must rely solely on recollection to evoke what would surely have overblown into an impersonation larger than life. [...] How quickly it becomes difficult to remember a person who is dead with any sort of clarity.” This ties in with the book’s meditations on the nature of death and the absence of a larger pattern in our lives. And yet, to get a sense of Pheroze’s actions and imperatives, I felt more space needed to be given to the love that defined him.

The Author’s Note reveals that this book began life as a documentary on corpse-bearers, which Mistry had been commissioned to write. This may account for the fact that much of it reads less like a well-paced, internally consistent novel and more like fragmented socio-history, trying to say too much about too many things. In the process, the man at its centre becomes nearly as much of a stranger to us as those anonymous cadavers he carries through his city.
Posted by Jabberwock at 7:04 PM