Repetition and circularity in The Crown

[I have written about the web series The Crown in a few earlier contexts - here are some posts: 1, 2, 3] 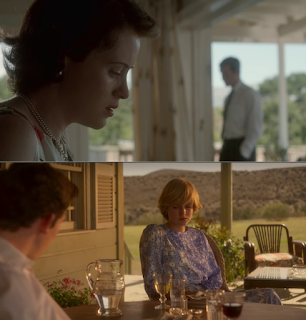 Mix and match time again. One thing that strikes me about The Crown, having followed the series over four seasons covering more than four decades, is the circularity and repetitiveness of the narrative (I don’t mean this negatively). To some degree, this is built into the show’s DNA: however dramatized and embellished The Crown is, in essence it is about a woman whose life and reign are founded on the very boring adages “duty over personality” and “don’t express an opinion” – and about the people orbiting around her who try to be messily human once in a while, or just to express themselves, but have to conform to varying degrees (or break away from The Firm with often-tragic results, like Diana does).

A story like this obviously decrees some repetition in conversations (the frequent and prim use of lines like “It is my duty” can get tedious even when spoken by excellent actors like Claire Foy or Olivia Colman), or some echoes between events, character arcs and relationships over the decades. (Just one instance: the similarity between Prince Charles’s romantic life in the 1970s – vis-à-vis the married Camilla – and that of his great uncle Edward, an earlier Prince of Wales, in the 1930s, has been commented on even in dry histories and documentaries.) But the writer-showrunner Peter Morgan has also consistently tried to emphasise these echoes by providing visual links between episodes across seasons. For example:

1) With a roomful of people looking at him, Philip asks for “help” – first as a teenager in the 1930s, studying at Gordonstoun under Kurt Hahn (season 2, episode 9); and then as a middle-aged man in the early 1970s, opening up about his lack of faith to the Dean of Windsor (season 3, episode 7). 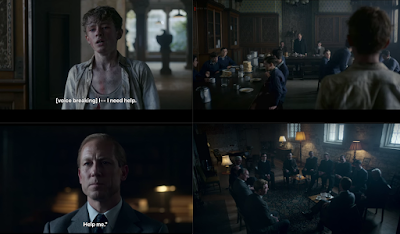 2) On a plane, heading home after learning of a loved one’s death, a monarch-in-waiting reads a letter from a grandparent (or honorary grandparent), reminding them of their duties: Elizabeth in season 1, episode 2; Charles in season 4, episode 1. 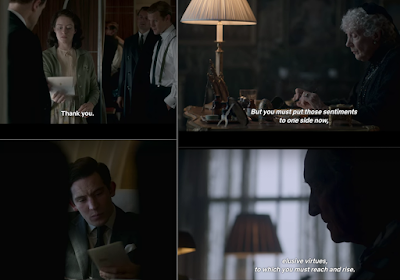 3) George wakes his son-in-law Philip early in the morning to take him on a duck hunt and give him a pep talk about being compliant husband to a future queen (season 1, episode 1); Philip takes his future daughter-in-law Diana on a similar early-morning hunt and a sort of reconnaissance, to assess her suitability as wife of a king-in-waiting (season 4, episode 2). A line used here, ostensibly about the hunt – “We only get one shot at this” – also becomes a comment on two outsiders (Philip and Diana) working their way into the Windsor universe 35 years apart. 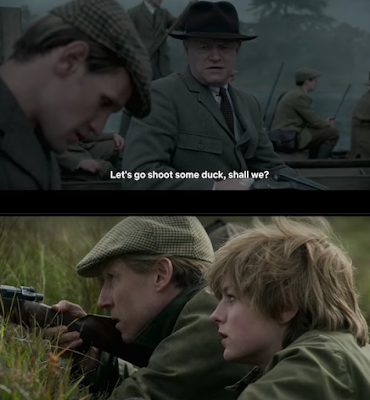 4) A king may go a progress through the guts of a beggar… Along with the opulent sets and extravagant lifestyles, there are moments like this: two kings, coughing blood into first a sink, then a toilet bowl, before flushing away this unwelcome evidence that the clock is ticking for them. In season 1, episode 1, George VI discovers signs of the lung cancer that will kill him a few years later. (It’s a terrific irony that the opening image of THIS show is so dingy and unglamorous, with the third shot being the inside of a blood-streaked commode.) And in season 3, episode 8, former king Edward VIII  finds a similar fate awaiting him. 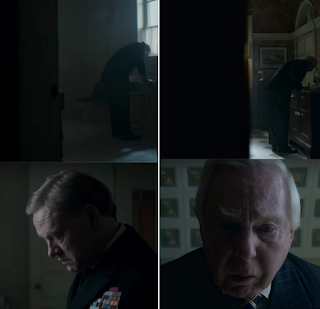 There are many other such instances through the show (this is not counting cases where parallels or contrasts are very overtly made within an episode, as is done in the excellent “Paterfamilias”). But in using these linking devices often, Morgan also pointedly shows how people, even when their basic characters remain unchanged, come to occupy different roles – and invite new types of judgements – with the passage of time and with the emergence of new contexts. Thus: in the 40s and 50s, Elizabeth and Philip might be a dynamic young couple, in love, letting their hair down with friends (until circumstances lead her to the throne earlier than expected); but by the 70s these same people have become distant, conservative, authoritarian figures, controlling their children’s lives. The Elizabeth and Philip of 1954, having a furious spat during a demanding Australia tour, yield to a dour elderly couple watching a video of that same tour three decades later and lecturing their son and daughter-in-law about how the trip had brought them closer together.

Or look at the young Charles of season 3, shy and awkward, in love and out of sync with his responsibilities, one of the most sympathetic figures the show has had (you want to hand him a cookie or a security blanket every time you see him); and then look at the same character midway through season 4, only a decade or so older and played by the same actor, as a stuffy and resentful husband who can’t be bothered about Diana’s feelings beyond a point.

Since most of these royals have lived such long lives, and since most of them have lived these long lives inside an aquarium, they provide a good laboratory study (especially when filtered through the hyper-dramatic lenses provided by Morgan) of how our perceptions of people change – and a reminder of the truism that everyone becomes a villain if they stick around long enough.

Posted by Jabberwock at 4:45 PM