Love and longing in Prague - on Nirmal Verma's वे दिन


[Did this piece for the Sunday Guardian]

“Happiness always takes us by surprise, or perhaps it is not happiness. It is one’s unhappiness diminished in size.” 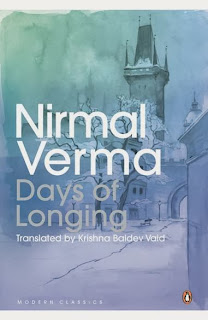 Is this a happy book or a sad book? The question sounds trite and reductive, but it leapt to mind as I turned the last page of Nirmal Verma’s Days of Longing, an English translation - by Krishna Baldev Vaid - of the 1964 novel वे दिन, now out in a new edition by Penguin’s Modern Classics. Depending on one’s perspective (and possibly depending on what stage of life one is in), this could be an essentially sad story disguised as something brighter, or the converse, a breezy, slice-of-life tale pretending to be a tragic love story. Either way, this is among the most moving novels I have read in a while – and in one sense at least, among the most unusual.

Here is a book by an Indian writer, about an Indian student who has lived in cold Prague for over two years, and is spending the Christmas holidays (a time of year when overseas students typically go home) in the city, with the few friends who are still around: among them a Burmese student named Than Thun (TT), a restless German named Franz, who is studying cinematography but getting nowhere, and Franz’s girlfriend Maria, who is unable to get the visa that will allow her to leave the country with him. Much of their time is spent visiting pubs or lolling about in their gloomy hostel, drinking vodka or beer or sherry almost throughout the day, not so much to get drunk as to stay warm (as in so many Eastern European novels, the weather seems a constant factor in the characters’ lives, informing their actions and attitudes). They often go without hot water and don’t seem to sleep for more than a couple of hours, but subsist – more or less cheerfully – in each other’s company; they joke about living in “the city of empty pockets and full bladders” (because there are very few public urinals). 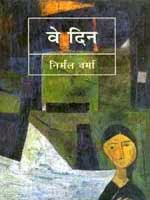 And through all this, the Indianness of the unnamed narrator-protagonist scarcely seems a factor at all***. For a reader used to the many soul-searching narratives about displacement or exile in Indian English fiction, this can be startling. We learn nothing about this young man’s family, his background, even which part of India he comes from. (For the longest time, I didn’t picture him as Indian at all; instead, drawing on a prior reference point for a story set in Czechoslovakia, I saw him as a version of the wide-eyed, sallow-complexioned Milos in the film Closely Watched Trains.) There is a mention of a letter from home, which he isn’t eager to open (“I remembered that I had not yet read my sister’s letter, but then I remembered that there was no light. I felt happy at the thought that I wouldn’t have to read it that night”), but it isn’t the case that something dramatic led him to “escape” to a foreign land – it is more as if he has settled into a cocoon beyond ideas of country or culture or nostalgia, a cocoon woven around new friendships. “We had left home at a stage when our childhood connections had been cut off and we hadn’t yet forged adult links with people and places,” he tells us, speaking of himself and TT, “Our homes seemed unreal from afar, like someone else’s homes, alien memories. They seemed meaningless, even ridiculous.”

Into this languid, drifting life comes the seed of a “plot” when the narrator (I’ll call him Indy for convenience, as his friends sometimes do) gets a temporary job as an interpreter for an Austrian woman named Raina and her little son. Indy and Raina grow close, and over the three days they spend together he experiences a range of emotions, swelling, then subsiding and swelling again: from hesitance and doubt to intense longing and awareness of hours spent apart, to quiet jealousy and possessiveness, built on the knowledge that her previous visit to Prague had been in the company of her now-estranged husband Jacques, and that she may be attempting to relive it by going to the same spots again.

“It bothered me,” he says, “I wanted her to look at everything for the first time. But she seemed to be keen about revisiting places she had already seen.” And then the simple yet powerful pathos of this line: “After knowing some people, one can’t help feeling one’s met them a bit too late.”

“It wasn’t age that separated us. It was her past, completely concealed from my knowledge. There are houses that you can’t really enter even through their wide open doors. They are alien, unpossessable.”

These could be the thoughts of anyone who has wondered about a lover’s romantic history, but here they also have to do with Raina’s experiences in the Second World War. It occurred to me that with a shift in narrative focus, this novel would strongly resemble William Styron’s Sophie’s Choice (which came 15 years later), about a young man besotted by an older woman but also permanently cut off from her by the terrible things she went through in the past, and unable to compete with the ineradicable, sado-masochistic relationship she has with the man who shared that past with her.

Days of Longing is not as obviously driven by political events as Styron's novel – it is sparer, more abstract, more concerned with a young man’s interior life than with larger histories. Yet the shadows of those histories do loom in the background: in the brief allusions to WWII (Raina makes the strange but believable admission that her relationship with her husband, secure when they were living in turbulent, war-fractured times, began to dissolve when peace arrived), but also in the little reminders – through the parallel story of Franz and Maria, or a reference to a sad, accordion-playing hostel inmate who can’t go home to Belgrade to be with his family – of troubled relations between the European countries in the present day of the narrative. Throughout, there is a sense of how the personal is affected by the political.

And hanging over Indy and Raina is the knowledge of how short-lived their relationship is. In a sense, all their time together is preparation for being separated (not unlike the lovers in Richard Linklater’s Before Sunrise) and the very temporariness makes it more intense, making him more aware of the need to hold on to things and remember them; to be seduced by the idea of love rather than the tangible presence of it. (“Remember the day we went to the skating rink?” she asks. It is an oddly put question on the face of it, since it refers to something that happened only 48 hours earlier. Yet it makes sense – they are trying to fit a lifetime of longing into this short period.)

In fact, a possible key to this book’s mysteries is a description of love as a temporary respite: “It was like an invisible fire that we could feel, that had been trying to pierce through our mutual darkness […] Three days or three years don’t make a difference unless we can catch hold of a burning moment in the darkness, knowing full well that it won’t last and after it is extinguished we will slide back into our own chilling solitude.” That burning moment set against darkness finds an echo elsewhere in the book. At one point Raina relates something she had once been told, about there being two kinds of happiness, big and small. Small happiness includes the warmth provided by fire or sherry, or the company of friends. “And the big happiness is to be able to breathe, just to be able to breathe in open air.” The words, tellingly, came from a Jewish man who was laughing and handing out cigarettes at the time, but was later killed by the Germans.

This elegant, hard-to-classify novel doesn’t quite provide a sense of closure or even development, which is why it is difficult to think of it as a coming-of-age story – it seems Indy’s life will continue along a circuit, much like the city’s trams gliding along their familiar routes (and perhaps I can call to mind here the ending of a favourite novel, also set in an Eastern European city, Kazuo Ishiguro’s The Unconsoled). But perhaps his time with Raina has helped him come to terms with the crucial idea of “small” happiness, and the possibility that this romance, so all-encompassing while it unfolded, could in the larger view of things be just another addition to that list. Most of all, perhaps the lesson he is learning is that there may not be anything so grand or lasting as a big happiness.

*** Of course, the question arises: if one were reading this book in the original Hindi, would it be possible to "forget" or disregard Indy's Indianness? I imagine not, having read an excerpt from वे दिन on Pustak.org.

P.S. Krishna Baldev Vaid, a renowned writer himself, was a contemporary and sometime friend of Nirmal Verma; for a sense of Vaid’s often-ambivalent feelings about Verma and his work, read this tribute.

P.P.S. The Modern Classics imprint also has a new edition of The Red Tin Roof, a translation of Verma's लाल टीन की छत
Posted by Jabberwock at 8:46 PM