[A version of this review appeared in The Hindustan Times]

The three central characters in Tabish Khair’s new novel contain many sets of polarities. The unnamed narrator – a thirty-something lecturer living in Arhus, Denmark – is a Pakistani Muslim by birth but also an atheist (“I had given up on God a long time back; if God had existed, I am sure he would have reciprocated in kind”). His friend Ravi, a tall, good-looking man working on a PhD in history, is an irreligious Hindu who becomes interested in the nuts and bolts of Islamic practice. And their landlord Karim Bhai – who has lived in Denmark for years but appears generally indifferent to the country – is a devout Indian Muslim who holds Quran sessions in their flat every week.

What unfolds as these men go about their lives is a narrative about reading yourself and other people. Ravi and the narrator are the more obvious kindred spirits, liberal men who can banter about any subject. They go on blind dates hoping to find that elusive Danish woman “who doesn’t date only white men or only coloured men”, and their conversations turn on the intricacies of race and religion: the attraction that Oriental exoticism holds for a certain sort of white person; the subtle difference between “Allah hafiz” and “Khuda hafiz” as forms of greeting. Eventually Ravi – much to his own surprise – falls deeply in love and the narrator begins a pleasant but less intense relationship of his own. 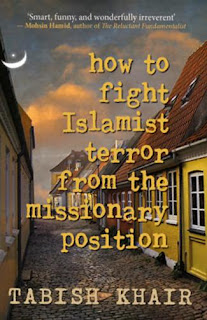 We never get a similar perspective on Karim’s interior life. Though a seemingly decent sort, he is also an incongruous, shadowy presence – much like the protagonist of Khair’s last novel The Thing about Thugs, a Bihari man who becomes a murder suspect in 1830s England. We see Karim through the narrator’s eyes, and the narrator is wary of this “narrow, religious man, intolerant of so many aspects of modernity”. When he mentions the Prophet, we are told he does so with “that irritating glaze in his dark-edged eyes that fellow Muslims often get when speaking of the founder of the religion”. He receives mysterious phone calls, displays homophobia and there are occasionally loud arguments in his room. Through it all, the narrator – writing with hindsight – makes teasing allusions to a terror-related incident that the reader presumably knows all about; we think about the Danish cartoon controversy from a few years ago, and our suspicions are further roused.

Perhaps most damningly for Karim, he does not have a sense of humour or irony. This is a trait that irreligious people (perhaps with some justification) tend to associate with the very religious, but I think it also shapes the reader’s attitude towards the character: it might be said that the die is loaded against the po-faced Karim because irreverent humour is so central to this book’s appeal.

Almost throughout, there is a beguilingly light touch to the writing. (The opening scene, which takes place in a suburban side-street early one morning, combines the following disparate elements: a harried husband, a pending lecture, masturbation and a cruising patrol car.) Khair has a talent for effortlessly funny sentences - when Ravi and the narrator enter a bar unfrequented by Asian men and the inebriated occupants turn around to watch them, “one man revolved all the way round under his initial impetus and had to try again”. A line like “Bastard was a term of affection between us, as it usually is in the subcontinent between men who share a Catholic missionary school education” is a reminder of how holy cows might be skewered when they pass from one cultural tradition to another. Late in the narrative, there is a brilliantly deadpan account of an old man locking himself in his bathroom, calling the police and munching on a sandwich to pass the time while a would-be assassin tries to hammer down his door.

The more flamboyant humour usually comes from Ravi’s distinct voice – a relentless wordsmith, he theorises passionately (dating only “plain” girls, categorising his relationships as Platonic, Gandhian and Marxist), uses deliberately cheesy sentence constructions (“You are one picky Paki, pardner!”) and often lapses into his “oratorical mode”. But beneath this showiness one sees a more sensible side. He is in a way a bridge between the narrator and Karim – he can joke about complicated namaaz postures being “the gym of Islam”, but he is also genuinely interested in (and unprejudiced against) Karim’s orthodox religiosity.

Ravi’s transformation in our eyes from being a shallow child of privilege to a principled, inclusive figure is an important aspect of a story about blinkers and crossed connections. Misleading gestures and inflections – and inadequate attempts to understand them – run through this narrative. Describing a man who is later arrested for a criminal act, a shop-girl says he looked distracted, but then changes her statement to “he looked very intense”. To a white man’s ears, a Somali’s threats sound like “some gobbledygook language”. More than once, the narrator notes Karim’s expression or reaction when something is said, and draws a conclusion from it.

It might sound frivolous to say this of a book about the clash of civilisations, cultures and individual attitudes, but my only real problem with How to Fight Islamist Terror... is that it isn’t as consistently funny as it might have been. The pace slows down along the way and the narrative is stymied somewhat by a romantic thread and by symbolism involving glasses half-full with love (or tolerance or understanding, or whatever qualities we must aspire to in our dealings with other people). But though this weighs down the book’s midsection, no lasting damage is done. This is, for much of its length, a clever, self-reflective tale about (as the narrator puts it in another context) the difference between what we seem to be and what we are to ourselves.

[Two earlier posts about Khair's books: a review of Filming; and a snippet on The Thing about Thugs]
Posted by Jabberwock at 7:20 AM