A boy and a ship: unstructured thoughts on Michael Ondaatje’s The Cat’s Table

[Notes for a review I may or may not finish writing - as you can probably tell, I have conflicted feelings about the book]

– On a large ship travelling from Sri Lanka to England in 1954, an 11-year-old boy makes the first significant journey of his life; it will be a rite of passage too. Three weeks are to be spent at sea and he is for all practical purposes travelling alone: a distant acquaintance who happens to be on board keeps an eye on him, but she is a First Class passenger while Michael – along with two boys his age and a few scattered adults – has his meals in the least privileged section of the ship’s huge dining room. 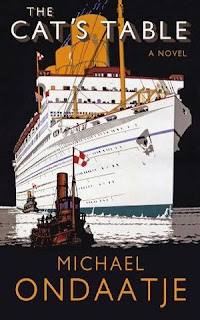 The good thing about being placed at the “cat’s table” is the sense of independence and vague disreputability it creates in one so young. Michael spends his days mostly in the company of his two new friends, the self-assured Cassius and the introverted Ramadhin, and their paths intersect with those of the adults around them: a botanist who is transporting a whole shimmering garden in the ship’s hold; a half-Sicilian pianist named Max Mazappa; an acrobat with the stage name The Hyderabad Mind; a quiet teacher going to England for the first time; the enigmatically spinsterish Miss Perinetta Lasqueti; and most thrillingly, a shackled convict who is believed to have killed a judge.

– “Once we climbed the gangplank onto the Oronsay, we were for the first time by necessity in close quarters with adults,” says the grown-up Michael, narrating the story decades after the journey. Over the course of this novel (written by another Michael – Ondaatje – who also happened to be on an ocean liner from Ceylon to England in 1954), we are left in little doubt that his shipboard experiences have resonated throughout his life and become reference points for him. (As a married man, when Michael sees his wife dancing with someone else and making a casual gesture that implies intimacy, he is reminded of seeing a similar gesture made on the ship’s deck years earlier. There are many other echoes of this sort.)

But even while The Cat’s Table recognises the ways in which people are shaped by – and return to – their early experiences, it is perceptive about the huge gulf between childhood and adulthood. At one point, Cassius suggests that the boys keep their backgrounds to themselves. “He liked the idea, I think, of being self-sufficient. That is how he saw our little gang existing on the ship.” It’s a reminder that this is how so many of our earliest friendships play out, with the participants being unaware of, or uninterested in, family and background details that will later come to mean a great deal.

– This book is also about the impossibility of knowing exactly how and when you pass from one life-stage to the next. (When sailing through one vast body of water after another, the boundaries are necessarily imprecise. There are no signposts to tell you exactly where this sea ends and that ocean begins.) Even as Michael spends his time blithely adventuring with his friends – “being a child”, in other words – there are passages where he shows the self-awareness one associates with growing up. A significant moment between him and his older cousin Emily, who is also on the ship, carries a hint of sexual awakening before resolving itself into a more conventional scene of a distraught child being consoled by a relative. On another occasion, briefly coerced into assisting a thieving Baron - his body covered in the oil that allows him to slither through a narrow cabin window - Michael sees himself in a mirror. “This was, I think, the first reflection or portrait that I remember of myself,” the adult Michael tells us, “It was the image of my youth that I would hold on to for years – someone startled, half-formed, who had not become anyone or anything yet."

(This reminded me of Pip in the graveyard in the superb opening pages of Great Expectations: “My first most vivid and broad impression of the identity of things seems to me to have been gained on a memorable raw afternoon towards evening...”. Incidentally The Cat’s Table contains a brief but important reference to Dickens’s convict Magwitch.)

– What slightly muddied my appreciation of The Cat’s Table is that this is two different novels in one, and they cut into each other’s space. The first is a pure adventure tale, a boy’s voyage of discovery on board an unimaginably big ship where many exciting things happen and many intriguing people are met. The second is a more reflective attempt to link these events with Michael’s future, and while this is done with care and insight, the two modes don’t always come together seamlessly. 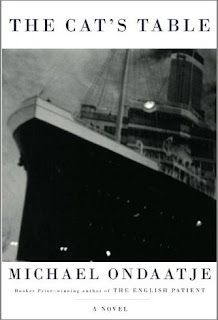 Initially it seems the story will be set exclusively in the distant past (and aboard the ship), but then the first of many “flash-forwards” occurs – a bracket-enclosed, page-length paragraph in which Michael mentions a further acquaintance with Ramadhin in London. Later, midway through the book, we are taken off the ship for 30 pages and given extended information about Michael’s subsequent life, including a relationship with Ramadhin’s sister Massi; and there is another long detour towards the end. I found my attention drifting during these sections. The Cat’s Table has many lovely passages and a real feel for how people and their relationships change over time, but the minor disconnect between its two halves make it as choppy in places as the ocean Michael crosses on his way to a new life.

– Some of the flash-forwards do work well on their own terms, adding new layers to our perspective on the ship days. For instance, though Michael appears to be closer to Cassius than to Ramadhin while they are together on the Oronsay, we learn that he will lose all contact with the former after they disembark. This is believable at a strictly realist level: we all know about intense childhood friendships which, when freed from the contexts in which they were formed, were quickly forgotten. But since The Cat’s Table constantly invites us to read it at a metaphorical level (with the three-week journey representing the wonders and uncertainties of childhood), I think it’s worth considering that Cassius stands for something latent in Michael – a feral side, perhaps, that he brushes against on the voyage and then turns away from once he reaches cold England. (At one point, recalling a subsequent adult visit to Cassius’s art exhibition – where they don’t meet – Michael uses this intriguing sentence: “Some grains of Cassius had after all remained in my system.”)
Echoes from a floating dream
– I don’t usually pay much attention to book-jacket texts – they can become traps for a reviewer – but there’s a striking phrase in this one: the Oronsay is likened to “the floating dream of childhood”. Ondaatje isn’t subtle about the symbolism of a large ship moving through the great unknown, but he very skilfully evokes the amorphous quality of our childhood recollections. The 21 days at sea don’t come to us in chronological order – the fragmented memory of the book’s narrator does not permit this. Two events – or encounters with different people – that might have occurred on the same day are narrated several chapters apart as Michael gives them a context. The three weeks become a cornucopia of colourful incidents, so that it’s difficult to pin down the order in which they occurred.

And of course, this is how most of our childhood memories work. Those of us who have held on to diaries we kept at a young age, or who have an unusually acute memory for dates, might theoretically know that two significant but unconnected incidents took place in (say) the same week 22 years ago; but when we actually try to recall them, our minds might find it impossible to fill in the other details of the time-span in which they occurred – or to even believe that they happened so near each other.

Towards the end of The Cat’s Table, the adult Michael muses: “Looking back, I am no longer certain who gave me what pieces of advice, or befriended us, or deceived us.” Throughout the book there is a sense of barely remembered conversations, or events that echo one another, so that the possibility arises that Michael’s memory is conflating one experience with another (which, again, is something we all do when attempting to recapture the past). 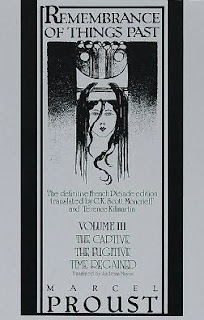 For example, at one point the adult Michael reads a letter written by Perinetta Lasqueti, where she mentions dressing up as Marcel Proust – complete with a slim moustache – at a fancy-dress party in her youth. This feels like an echo of an incident earlier in the book, when the child Michael describes Perinetta similarly disguised as a man during a port of call at Aden. It leads one to wonder: did the Aden episode really happen as he remembered it? (And could the Proust reference be a sly nod – by Michael Ondaatje the author – to the whimsies of memory?) There are other little recurrences in the writing (such as two references, a few pages apart but in completely different contexts, to the application of unguent on a skin wound) and they probably aren’t accidental, coming as they do from the pen of such a careful and organised writer.
Posted by Jabberwock at 6:50 PM