(In which Agatha Christie, Dorothy Sayers and others jointly plot a killing, or kill a plot)

It isn’t unheard of for a novel to be co-authored, but it does seem like too much of a good thing when a murder mystery is constructed, in instalments, by twelve professional crime writers. If too many cooks spoil the broth, do too many writers over-boil a plot? 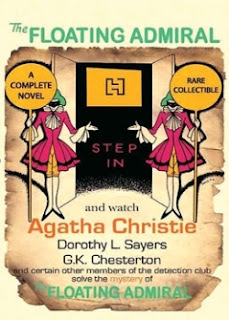 Yet these were the circumstances in which a whodunit titled The Floating Admiral was put together in 1931, by members of the Detection Club comprising such British mystery writers as Agatha Christie, Dorothy Sayers, John Rhode and Freeman Wills Crofts. Set in a small English town named Whynmouth (on the banks of a temperamental river that keeps changing tide much to everyone’s bemusement), the story begins with the discovery of a boat containing the corpse of a new resident, an Admiral Penistone. The first few pages establish the facts of the case and introduce us to Inspector Rudge, who will conduct the investigation; but the successive chapters, each by a different writer, add new characters and subplots. It turns out that the Admiral’s death could have something to do with the wedding plans of his sour-faced niece, but it might also have a connection with 20-year-old events in the opium dens of faraway China.

While the book’s long final chapter – written by Anthony Berkeley – “officially” ties up the loose ends, there is also an Appendix featuring the solutions proposed by each writer (except the first two, who were kindly excused). These were submitted along with the chapters they wrote, which means that at the time of forming these solutions they had no knowledge of the complications that would be introduced by the later contributors. Nor would any writer be allowed to read the others’ solutions until the book was finished. **

If that sounds confusing, it jolly well is. Here’s my main reservation about The Floating Admiral: when I’m reading a cosy whodunit of this sort – whether it’s by Christie or P D James or even Alexander McCall Smith – I like knowing that it comes from a single mind; that the little twists, clues or red herrings have been strewn through the pages by an individual who charted the whole plot out in her head beforehand. The reading process then feels like an amiable battle of wits with the author (even when I’m too engrossed in the plot to stop and try to figure out the solution). With a really good mystery that has a fabulously unexpected denouement, one can go back to the beginning to work out how the deception was perpetrated; one can smile at a throwaway sentence that becomes significant in retrospect, or admire the author’s cleverness in introducing an irrelevant but blindsiding sub-plot.

With The Floating Admiral all this is possible to an extent, but the process is never as intense and personal because you’re constantly aware that this is a joint work where many of the writers were nearly as flummoxed as you are – and that the unfortunates who were saddled with the later chapters had to not just build on an existing story but also work towards a solution that was consistent with details thought up by other people. (As Sayers explains in the book’s Introduction, “Each writer was bound to deal faithfully with all the difficulties left for his consideration by his predecessors. If Elma’s attitude towards love and marriage appeared to fluctuate strangely, or if the boat was put into the boat-house wrong end first, those facts must form part of his solution. He must not dismiss them as caprice or accident, or present an explanation inconsistent with them.”)

Sayers herself does quite well (she wrote the seventh chapter, provided an elaborate solution and in general seems to have had a good time), but on the whole things get heavy-handed halfway through the enterprise. In Ronald Knox’s tedious chapter “Thirty Nine Articles of Doubt”, Inspector Rudge, retiring for the night, makes a long list of ideas he has to follow up on. This is overkill, to put it mildly – I got the impression that Knox had run out of ideas and was trying to fill space by tabulating all the information accumulated thus far. The Floating Admiral is a notable curio – a literary experiment that should be of value to the aspiring detective-story writer, or to someone with special interest in the methods and personalities of the English crime novelists of the period. (Some of the solutions are written in a pleasingly informal style, and there is light banter too. For instance, Knox speculates that Canon Victor Whitechurch, who wrote the first chapter and was known to be strongly religious, would not have approved of a vicar as murderer!) But whether it works as a murder mystery in its own right is debatable.

P.S. It’s no surprise that the book’s new reissue highlights Agatha Christie’s name on the cover, even though her contribution is barely 10 pages. But I admit to feeling tickled that Christie’s proposed solution (which is notably different from most of the others) came close to my own initial ideas about the crime. I also got some amusement from the thought that just two years after participating in this venture, she wrote a book (Murder on the Orient Express) in which the killing was jointly done by 12 people!

[Did a shorter version of this for my Sunday Guardian column]

** I’m a little unsure about whether the contributing writers were completely honest about not discussing the mystery with each other. Without revealing too much: if you read the book, try comparing Freeman Wills Crofts’ account of a woman visitor arriving by car in Lingham village late one night with a very similar proposal in Sayers’ solution in the Appendix. Keep in mind that Sayers wrote chapter 7 (and submitted her solution along with it, to be opened only after the book was completed) while Crofts wrote chapter 9 – which means that according to the rules, neither would have had access to the other’s account at the time they wrote their own. I suspect blackness in the lentil soup.
Posted by Jabberwock at 6:25 PM