Glimpses from a cultural and literary Quest

[From my Sunday Guardian books column]

One of the pleasures of reading The Best of Quest – a collection of essays, fiction and poetry from the pages of the now-defunct quarterly magazine that was dedicated to “inquiry, criticism and ideas” – is discovering the many voices of the late Dilip Chitre. I had a passing acquaintance with Chitre’s poetry, and a memory of the film Godaam which he wrote and directed, but I hadn’t encountered his essay writing before this. 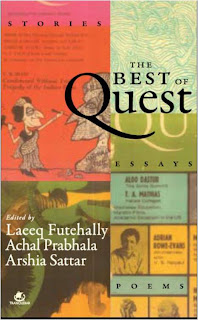 Chitre’s long association with Quest began in the 1960s and continued till the magazine's dying days during the Emergency years; he later served as an editor for its second incarnation New Quest. Consequently his writings – reviews, opinion pieces and a translation of Hamid Dalwai’s incisive piece “Mohammed Ali Jinnah: A Study in Hatred” – are well-represented in the lengthy “Essay” section of this book. But in addition to the pieces that appeared under his own name, Chitre also wrote a regular column using the pseudonym “D”.

“There is a comedian inside me who is restless to burst into the open,” he explains in “I was D”, the last piece included in this book (and written not long before his death), “I love to mark the absurdity underlying most seriously regarded things. I also love to take the comic as seriously as it deserves to be taken.”

Both "D" and "Dilip" consistently display wit, acumen and the ability to engage with a variety of topics. Even when one disagrees with some of Chitre’s views (among other things, he calls R K Narayan a “second-rate” Indo-Anglian writer), it’s hard not to respect the honesty and intelligence behind them. At other times, you might instinctively blench at something he says – or wonder if he’s being facetious – only to realise upon reflection that it contains a kernel of truth. In a possibly part-satirical piece titled “What has Dimple Got that Satyajit Hasn’t?” Chitre compares Raj Kapoor’s very mainstream film Bobby with Satyajit Ray’s artistically high-minded Ashani Sanket and suggests that “their moral and aesthetic import is on the same level of mediocrity... Except that Ray fails to entertain the masses, which Kapoor does”.

Raj Kapoor produces opiates for the masses, including the educated uncultured, while giving them traces of cinematic value; Ray gives the middle class its own kind of highbrow drugs, heaps of crude cinematic values coated with the sugar of a static pre-modern imagination.

Other highlights from the pen of D/Dilip include “Aspects of Pornophobia”, in which he lampoons undiscerning censorship and the general incompetence of those saddled with “preserving culture” (there's a great anecdote here involving the actress Snehaprabha Pradhan and a "seductive female dog"), and the long essay-cum-review “Nirad’s Nightmare”. The latter is an analysis of Nirad C Chaudhuri’s book The Continent of Circe as well as a psychological profile of its author “who began as an unknown Indian and, after years of striving, has virtually become perhaps one of the most authentic Englishmen of all time”.

When he is worked up to a climactic frenzy in expressing his love for England and things English, Mr Chaudhuri gives one a sense of parody by extreme perfection – a comic ability to run rapidly and unhindered on a track strewn with banana peels. Even an Englishman would find the strain of being so precisely and religiously English all the time quite unbearable.

Again, some of the views expressed here can be debated – Chaudhuri was a complex figure and the product of colliding cultural influences – but there’s little faulting the intellectual rigour of Chitre’s arguments.

Apart from Chitre’s work, there is much of interest in The Best of Quest, including a thoughtful interview (by Adrian Rowe-Evans) of V S Naipaul. Anyone who has had trouble reconciling Naipaul’s frequently splenetic or obnoxious behaviour with the empathy in the best of his work might be intrigued by this bit:

I may sit down in enormous rage to write something; I might even begin in terms of caricature and animosity; but in the course of the writing, something will happen. That side of me, that comes out in the writing, is the better side, and better not because it’s nicer but because it’s truer; it’s the side that in one’s rage one might wish to forget. I began my recent book about Africa with a great hatred of everyone, of the entire continent; and that had to be refined away, giving place to comprehension.

Having working on the literary beat for only the last few years, I also found it illuminating to read Jyotirmoy Datta’s 1966 essay “On Caged Chaffinches and Polyglot Parrots” – a sardonic, often whimsical critique of Indian writers who worked in English – followed by P Lal’s measured response. (“We do not write in English because it is a pan-Indian language of the educated; we write because we cannot write as well in any other language...There are many plots to till; English is one.”) The discussion is a reminder that the many fierce debates around Indian Writing in English did not begin in the post-Midnight’s Children world. I’m not done with The Best of Quest yet – there’s plenty to read in the Fiction section, including short stories by Kiran Nagarkar and Kamleshwar – but what I’ve read so far has offered a very agreeable glimpse of the cultural and ideological discourse of another time, much of which is still relevant today.
Posted by Jabberwock at 9:01 AM